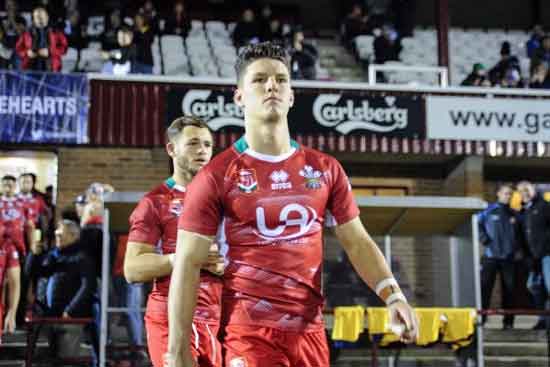 The Dragons take on Ireland at the Racecourse Stadium in Wrexham on Sunday (3pm kick-off) and the winner will secure qualification for the 2021 Rugby League World Cup.

After making his debut against the Irish in the final group match of last year’s World Cup in Australia, Ralph has featured in both of Wales’ European Championship matches so far.

If he plays a part on Sunday, however, it will be the first time he has pulled on the red jersey in front of a home crowd.

“The game’s in Wales so it doesn’t get any bigger than that,” Ralph said.

“The winner goes straight through to the World Cup so it’s really important we put in a good performance and get the result we need.

“I’ve got my dad and pop here as they’ve both travelled over from Australia. My dad actually hasn’t been over here since he was five-years-old so it’s a really big game for me personally as well.”

Following defeat to France in their European Championship opener, Wales put in an impressive display in their second outing, beating Scotland 50-12 in Galashiels.

Ralph is hoping they can carry that form into Sunday’s clash with Ireland.

“I think it has taken us a game and a half to really click,” he said.

“When we went out in that second-half against Scotland, I think the penny dropped and it goes to show that, when we do what we’ve practised as a team, how easy it can be.

“If we can carry on what we did in the second-half last week, I hope we can take home the win against Ireland.

“Training has gone really well. It has been a high intensity and we’ve been working hard both on our defence and offence.”

Although he qualifies to play for Wales through heritage, the 21-year-old is proud to play for the Dragons and is excited by what the future holds.

He added: “When you came into camp, you looked around and there were a lot of young blokes, even compared to the World Cup last year.

“You see everybody training and I guess we’re all just hungry to play. It is the same as I am now and was in the World Cup last year.

“You’ve got to prove yourself and I think everybody else new is doing that.

“It is exciting to see what rugby league in Wales is going to be like in a few years’ time.