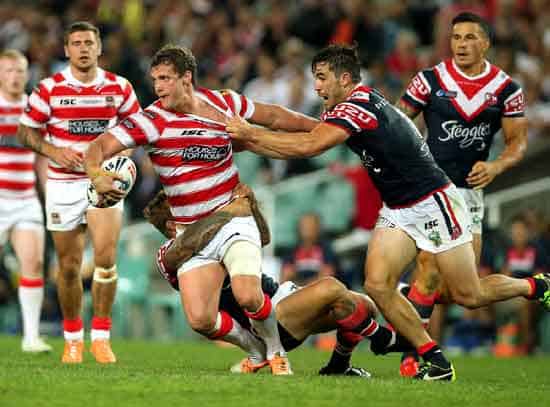 The match will be televised live by Sky Sports.

It will be the 27th Challenge since the Roosters were the inaugural winners in 1976, the sixth in Wigan, and the fourth at the DW Stadium – where Wigan won the last of their record four world club titles two years ago, with a memorable 22-6 triumph against the Cronulla Sharks.

That was the only British victory in the World Club Challenge in the last six years, with Melbourne Storm recapturing the title for Australia by beating Leeds Rhinos 38-4 in Melbourne at the start of the 2018 season.

The Roosters, who won their 14th Australian title this year with victory over Melbourne in the NRL Grand Final, will be aiming to equal Wigan’s tally of four World Club Challenge wins – having demolished St Helens 38-0 on their last Challenge appearance in England in 2003, and beaten Wigan 36-4 on home soil in Sydney in 2014, in addition to that initial 1976 win against St Helens, also in Sydney.

Wigan’s previous wins came against the Brisbane Broncos in Queensland in 1994, against Penrith Panthers at Anfield in 1989, and against Manly Sea Eagles at their old Central Park home in 1987 – the fixture that really established the World Club Challenge.

Robert Elstone, the chief executive of Super League Europe, said: “I can’t wait for two giants of our game to go head to head, seeking to be crowned the best club team in world rugby.

“The opportunity to see some of the best players in the world is one I don’t want to miss and one I know all our fans will relish.

“The best of Super League versus the best of the NRL is a mouth-watering prospect, and will provide one of many early highlights in a season which promises so much.”

Ian Lenagan, the Wigan chairman, added: “The World Club Challenge is a special competition for the Wigan club and with a game against Sydney Roosters we have two of rugby league’s most iconic institutions facing one another. Seeing the cherry-and-white of Wigan up against the tricolour of the Roosters in front of a packed stadium on a Sunday will be a great spectacle. With the calibre of players on show from both teams, it should be a great advert for our sport.

“We’re delighted to be hosting the game in England and we’re looking forward to welcoming Owner Nick Politis AM, Head Coach Trent Robinson and the whole Sydney Roosters team and support staff to what should be a sold-out DW Stadium in February 2019.”

With the Sydney Roosters due to commence their pre-season training in the coming weeks, the club’s Chief Executive Officer Scott Bennetts said: “The World Club Challenge is a significant fixture on the rugby league calendar and we are very proud to be taking our club to England to compete against the Wigan Warriors for the 2019 World Club Challenge title.

“Both clubs feature notably in the history of the tournament, and with the Roosters having hosted the 2014 World Club Challenge match at Sydney’s Allianz Stadium, we are looking forward to making the trip to Wigan.”

Full ticket details for the game will be announced on Wednesday 7th November.