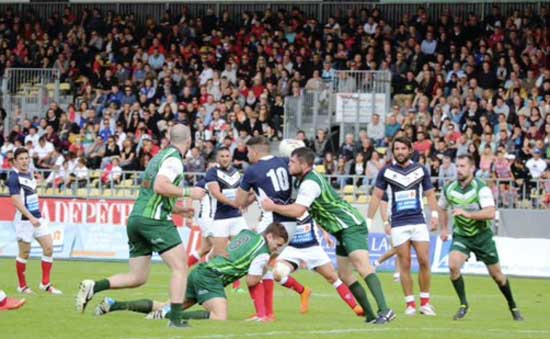 Ireland and France have named their 19-man squads for the European Championship clash at the Morton Stadium, Santry tomorrow (Saturday, kick off 2pm)

Both nations won their opening round matches, at home to Scotland and Wales respectively, and the winners stand on the verge of attaining automatic qualification to the 2021 Rugby League World Cup in England – the top two nations gaining instant passage.

Ireland head coach Stuart Littler has made one change, bringing in Belfast Stags’ Connor Phillips for Longhorns Richie McHugh. “We are looking forward to this game against a high quality French team,” he said.

“Last weekend saw nine of our players make their international debuts and I thought we put together an accomplished performance.”

Littler added: “We are hoping for a healthy crowd to witness our final home game of 2018. As ever, we intend to rise to the challenge as we strive to ensure Ireland qualify for the next World Cup but it is important that we also progress in our development as a rugby league playing nation.”

Toulouse Olympique pair Bastien Canet and Anthony Marion come into the French squad, replacing Stan Robin and Bastien Escamilla. Hooker Marion, who is likely to start on the bench and work in harness with Alrix da Costa, is selected for his defensive qualities, whilst Canet played well against England in Les Blues warm up game.

France head coach Aurélien Cologni is expecting a tough challenge from the Irish. “It’s not an end in itself but is rather the beginning of a progression which we hope will see us in the World Cup in 2021,” he said. “We hope to be further along that road after this game with a team that has some exciting youngsters within it.”

Skipper and man of the match in Carcassonne last week, Tony Gigot confirmed: “We were pleased with the way we went about the Wales game but we now need to build on that. It was a good start but we need to be more vigilant against Ireland, especially on defence.”