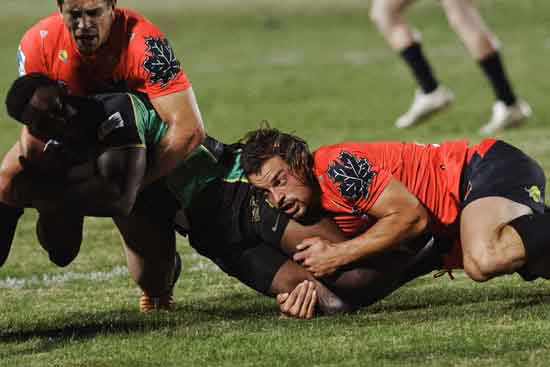 Jamaica has confirmed their 21-man playing squad for the 2018 Americas Championship, which will also act as qualifiers for the 2021 Rugby League World Cup.

The University of North Florida, Jacksonville, will host two double-header rounds on 13th and 17th November 2018, and in the opening fixtures Jamaica take on Canada, the winners facing either hosts USA or Chile.

For the Reggae Warriors it is a case of marrying up cultures, with four players from the domestic competition – all from 2018 double winners Duhaney Park Red Sharks – joining the bulk from the British game, in what is their strongest squad ever-selected.

“We’ve been preparing for this for two years,” said head coach Romeo Monteith. “We’ve brought in professional help in Glen Morrison as manager and Jermaine Coleman as assistant coach.

“We’ve kept a core of UK-based players together for that time, which is key to our strategy to qualify. Parachuting the professional players in every four years has not worked.”

Monteith added: “This time around we should see a team that is more cohesive as there’s better chemistry.”

London-based Jermaine Coleman noted: “The boys have been working well and training hard together now for a few weeks.

“It’s a difficult time of year for all involved as the season has finished at their respective clubs and blokes are spread all over the country.

“However, it shows their desire to represent their country as we drive from both ends of the country to make the sessions happen – the unity amongst the group, with a single goal, is unbelievable.

“They are super-excited to get across and join the local players and get into the games.”

Leeds Rhino Ashton Golding played for Jamaica in France last year but this is first campaign and he cannot wait to get to Florida on a self-funded basis.

“I am very proud to be able to represent my heritage,” he said. “I’ve always had a keen eye on how the national team has done and for me to be able to play in what could be an historical World Cup qualifiers has always been a personal goal.

“I can’t wait to get into camp, we have been meeting weekly, going through some tough gym and field sessions, to make sure we are physically and mentally ready for the challenge ahead.”

Mirroring him back on the Caribbean island is centre Renaldo Wade who was part of the World Cup qualifying squad in 2015 that just lost out to USA.

“I’m looking to a great campaign, it was a pleasure even to get selected and I just want to be the best I can be for my team in whatever way they need me,” he noted.

“I’ve been doing a lot of strength work both on core and legs, and so far my preparation has been going well.”