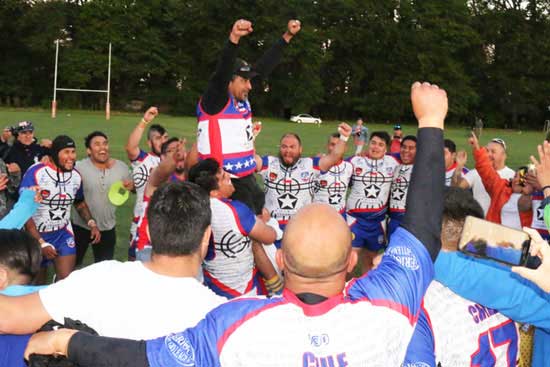 Chile is hoping make rugby league history as they prepare for the 2018 Americas Championship, which will also act as a qualifier for the 2021 Rugby League World Cup in England.
The University of North Florida, Jacksonville, will stage two double-header rounds on 13th and 17th November 2018, and in the opening fixtures the South American newcomers take on hosts USA, the winners facing either Jamaica or Canada.

It has been a relatively quick journey for Chile to these qualifiers, and an unexpected one. “When we started gathering interested players, our earliest thought was that Argentina and Uruguay would lead the way from the outset because of their strong rugby union background,” Latin American Rugby League co-founder Robert Burgin said.

“Then we thought Brazil might succeed because of their enormous population, or perhaps Guyana because they had success in sevens rugby and had naturally powerful physiques. Even 12 months after the sport started a concerted effort to engage people from Central and South America, it still wasn’t clear how dominantly Chile would emerge in the region.”

Chile’s dominance is underpinned by an unbeaten record in 13-a-side rugby league against all other Latin America nations over the past three years. They have also only been beaten once, in the final of a 9-a-side tournament in Miramar, Argentina in 2016, to the host nation.

As a result of the Pinochet regime in Chile, by the early-mid 1990s there were 20,000 Chilenos living in Australia, most settling on the eastern seaboard where rugby league is the dominant winter sport. Amongst them was Ernesto ‘Ernie’ Tobar, who later went on to become a lower grade player with the Penrith Panthers.

When Latin American Rugby League began creating momentum five years ago, Tobar was a central figure and was the first Latin American-born coach of the organisation.

According to Burgin: “Another family which migrated around the same time was that of Rodrigo ‘Rod’ Millar, who played country rugby league throughout Australia and is now one of the directors and head coach of the Chilean Weichafes. The sons of Ernesto and Rodrigo – Brandon Tobar, Brad Millar and Trent Millar – are all central players in the unprecedented quest to get Chile to rugby league’s biggest tournament.”

Interest spread back to their homeland, with Rodrigo Millar returning to Chile several times per year to help encourage a dedicated core of domestic players around the southern city of Los Angeles.

Two domestic officials who have been tireless in their work for the sport have been Guillermo Artiaga and Ronald Soto Badilla, helping it to spread the 2,000km along the elongated nation to Antofagasta in the north.

Chile also has a significant Polynesian community, numbering around 6,000 of the 18 million total population. Within the Chilean squad are players with mixed heritage from Samoa and the Cook Islands, as well as Melanesian influences from Fiji and Papua New Guinea.

The most famous rugby league player of Chilean descent, Marcelo Montoya of Canterbury Bulldogs, is of shared Fijian heritage.