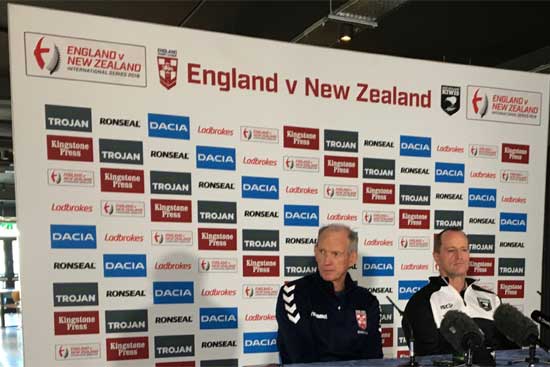 The home of Leeds United was the scene on Monday for the launch of the three Test series between England and the New Zealand Kiwis.

The two old rivals will lock horns at Elland Road, as well as Anfield and the KCOM Stadium, starting with the first Test in Hull this Saturday, October 27. They have already met once this year – in the inauspicious location of Denver, Colorado – where England prevailed 36-18.

But you get the sense over the next month the hosts will face a much tougher and more committed side on their shores than they did on US soil in June. The Kiwis are coming off a confidence-boosting 26-24 upset of the world champion Kangaroos at Mt Smart Stadium.

Coach Michael Maguire has had longer to work with his troops and his new spine of Dallin Watene-Zelezniak, Kodi Nikorima, Shaun Johnson and Brandon Smith was outstanding against Australia. Maguire told the assembled media at Elland Road he had been impressed with the Kiwis’ passion and dedication.

“I’ve been able to get my hands back into the coaching game now for the last little period, to get around to see the players and what they want to achieve and just the passion that they show for their country.

“It’s something I’ve seen now at first hand of how passionate these Kiwis boys are of playing for that jersey.

Maguire described the series against England as a “very important step” for his team, who are looking to rebuild after a disastrous 2017 World Cup.

“We’ve been able to put one decent performance together and when we were in Denver we put moments throughout the game where we wanted to be, but there was also a lot of improving we needed to do and we were able to show that in the test against Australia,” he admitted.

“Now we’re playing against a strong England team that’s been together for quite some time.”

It will be certainly be a new-look England outfit from the field that took the field in the World Cup final at Suncorp Stadium nearly 12 months ago. The likes of Ryan Hall, Sam Burgess, Kallum Watkins, Gareth Widdop, Kevin Brown, Luke Gale, Ben Currie, Alex Walmsley and Chris Heighington are all either injured, retired or unavailable.

England coach Wayne Bennett has some real selection puzzles to solve, and hinted in Leeds that Wakefield winger Tom Johnstone, who bagged a hat-trick on his Test debut against France, will likely miss out on the wing for St Helens flyer Tommy Makinson.

“He is one of those guys I think would not be out of place in the Test team. He may have to wait a little longer yet, but he will get the opportunity.”

The Brisbane Broncos mentor will need to choose two new halves, with George Williams, Jake Connor and Richie Myler all in the frame.

On Myler, Bennett said: “I like what he brings, he talks well and knows his footy pretty well. He is pretty competitive.”

Livewire Hull FC utility Connor is one player that has certainly caught the eye of Bennett, and is expected to start at the KCOM Stadium.

“He’s a guy who went well against New Zealand when we played in America,” he said.

“I’ve been a bit surprised by what he brings. He’s an understated type of bloke, he doesn’t say much, but whatever challenge I give him he can certainly meet it.

“He can play five-eight, centre, in the back-row. He’s multi-skilled and talented so he’s a good option for us.”