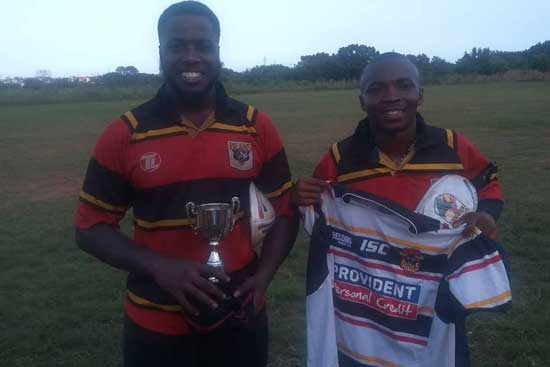 Skolars defeated Jamestown Pirates 18-12 in the inaugural final of the Accra 9s in Legon, Ghana – but only after the replayed decider had gone to golden point extra time. The initial tournament final a week before could not see the sides separated after they were locked at 6 a-piece, despite extra time, until fading light intervened.

In the replay, a William Pearce-Biney golden try finally broke the deadlock; Pearce-Biney finishing as the tournament’s top try scorer with five, including a hat-trick. He was awarded a Bradford Bulls jersey in recognition.

Skolars captain Glen Anokye said: “It was great to finally get the win after the tense draw last week. I hope we can extend our winning form when the 13-a-side competition starts.”

The fiercely competitive tournament has been excellent preparation for all four teams for the upcoming Accra Rugby League Championship, which also includes Madina Panthers – who took third spot in the 9s – and University of Ghana Bulls.

“I’m delighted with how the 9s went, but it’s important that we build on its success,” said RLFG General Manager Sam Leach.