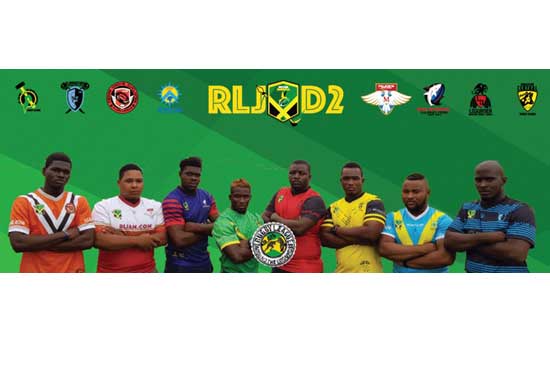 The RLJD2 competition kicks off this weekend, marking the fifth season for the Rugby League Jamaica expansion competition.

Eight teams will compete in two conferences for the 2018 season as expansion moves into St Elizabeth parish for the first time.

Amongst the exciting growth of the game in Jamaica, all teams have been outfitted through sponsorship from ‘Rugby League : Around the grounds’ and ‘WrApp.Pro’ as part of an exciting breakthrough deal for Rugby League Jamaica.

In a unique supplier deal, all team outfits will be available for sale online through www.1908.store with all revenue going directly to Rugby League Jamaica.

As part of this initiative, RLJ are encouraging rugby league fans around the world to adopt a RLJD2 team as their ‘Favorite Jamaican team in the world’ and to contribute to the growth of the game directly through the purchase of team merchandise.

Competing in Group 1 are the core Kingston based teams of Duhaney Park Red Sharks, Kingston Central Hounds, Liguanea Dragons and expansion team the Mona Pelicans. The Pelicans have been formed around the strong collegiate rugby league scene from the UWI.

In group 2, the CMU Spartans return for a second season after an impressive run in the national Knock out competition. They are joined by a reformed Portmore Eliminators side and two new expansion sides, the Cedar Grove Cyclones and the St Bess Sledgehammers.

Group 2 shows the remarkable progress in expanding the game, with representation across all of South Jamaica.

Speaking ahead of the launch, RLJ chief Romeo Monteith commented:

“We are very excited for the launch of RLJD2 and look forward to seeing some exciting games this season. We have been working hard here in Jamaica over the past year to bring our new sides into play.

I really hope the rest of the rugby league world jumps on board with support by adopting a D2 team, which can really help us to grow this expansion competition again.

I would like to acknowledge our corporate partners in ‘Rugby League: Around the grounds, ‘WrApp Pro’ and ‘www.1908.store’. Their input has helped us to bring the game to more Jamaicans than we have before, and we hope to continue expanding into the future. ”

You can keep up to date with the action through Rugby League Jamaica official media feeds.