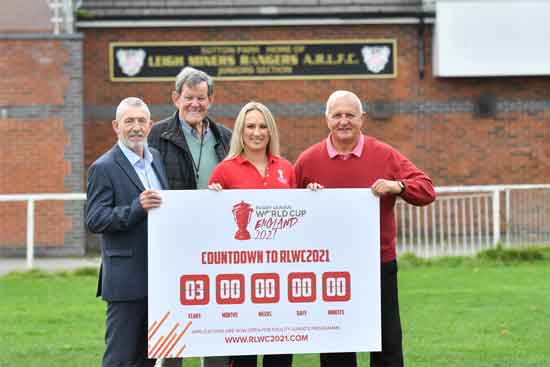 The initiative, part of the RLWC2021’s ambitious InspirationALL legacy programme, opened for applications today – and Cunningham, a 26-year-old full-back who played for St Helens in the first Women’s Super League season, visited the famous Leigh Miners Rangers community club who have been transformed by a previous injection of Sport England funding.

The funding for the CreatedBy RLWC2021 Capital Grants Programme will be delivered by the Rugby Football League in partnership with Sport England and will be split into large transformational projects and small accessible grants. The large grants are aimed at investing in clubhouse improvements, pitch improvement works and floodlighting, or the creation of new facilities that can support the growth of the game and long-term sustainability of clubs. The small grants are for projects up to £15,000, for items such as kits for new teams, training equipment, wheelchairs for sessions that will engage new audiences, grounds maintenance equipment to increase the quality of pitches, goal posts and post protectors.

Leigh Miners Rangers, an exemplar of the impact that community investment can have, received £50,000 of Sport England Inspired Facilities funding to develop its clubhouse extension, along with further funding from Viridor.

Steve Lloyd, Secretary at Leigh Miners Rangers said: “Thanks to our previous Sport England funding, we now have teams at all age groups from Under 7s upwards, with over 260 children playing regularly. The extension to the clubhouse and an addition of up to seven changing rooms, a physio room and a function room, allows us to be fully accessible and continue to grow our juniors alongside building links with local schools and colleges.

“We couldn’t have attracted this quantity and calibre of players to the game of rugby league without our Sport England funding. We’d encourage clubs and communities to apply through the RLWC2021 website as it has had an incredible effect on our club.”

England full-back and RLWC2021 ambassador, Jodie Cunningham said: “Leigh Miners Rangers are a prime example of what investment in the grassroots game can do, there is a massive appetite for rugby league and it proves that certain facilities, such as dedicated female changing facilities, are able to attract more women and girls to the sport.

“The way the women’s game here at Leigh has developed is fantastic, with a portion of their funding aimed at creating an appetite for women’s and girls’ teams in the area. I’m looking forward to the impact that the CreatedBy RLWC2021 Capital Grants Programme can have in similar areas as it supports the growth of the grassroots game.”

To apply for funding, visit www.rlwc2021.com/facilities.