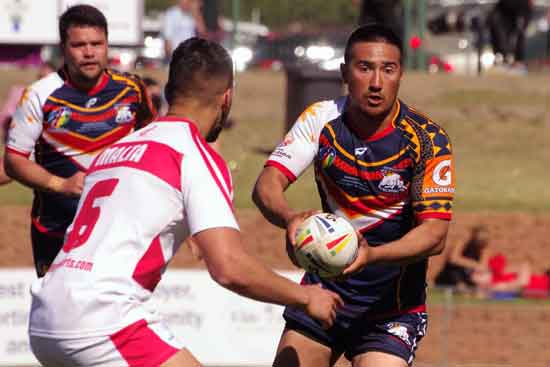 The Philippines National Rugby League Emerging Nations World Championship (ENWC) Journey started ominously before the tournament even commenced. Experienced forwards Shane Gray who has played for the Gold Coast Titans being ruled out with an injury sustained playing a Semi Final match for his Central Newcastle club. Rez Philips of the Goodna club in Queensland who had led previous Tamaraws teams was also a late withdrawal from the team due to work commitments.

Marvin Pace one of the supporting staff member of the National team has reported on the Philippine Tamaraws ENWC journey:

In the Philippines first game of this important campaign, all players knew we had to make a good start.

The game started out with Malta going over after 6 minutes through quick hands, and 2 more tries followed shortly to give Malta a 16 nil lead half way through the half, the Philippines had their chances but just couldn’t hold onto to the ball.

Debutant Jordan Bien scored and converted for the Philippines to bring them back into the game, but a 45% completion rate stopped them from building any sustained pressure. In the second half it was much of the same, a try to Blake Mackey got the score to 24 to 10, with Philippines having a slight sniff, but 2 late tries to Malta resulted in a final score of 36 to 10.

Philippines had 2 debutants Emmanuel Rodriguez and Jordan Bien at this first game, with both playing well. The coaching staff awarded the player of the match to Captain Paul Sheedy.

The 2nd game vs Niue was a must win game for the Philippines, with the winner joining Malta in the semifinals, two changes were made from the first game with Sean lynch and Ned Stephenson coming into the squad, debutant Emmanuel Rodriguez was left out due to injury.

Philippines got off to a perfect start with Niue knocking on from the kick off, leading to a try to Paul Sheedy and a conversion to Jordan Bien took Philippines to a 6 nil lead.

However it didn’t take long for the big forwards from Niue to start gaining their ascendancy, and before long four tries were put on and the half time score of 18 to 6. With a mounting injury toll and pouring rain a call to arms was made at half time, to dig in for one final 40 minutes, with a semifinal spot on the line. The boys fought with heart and bravery, with often the last pass going astray with the Niue defense holding firm but a try to Ellis Jensen and the conversion by Kieron Wiggins brougth the game back to 24 to 12 with 15 minutes to go, but the boys were unable to find a way through and that’s how the score finished.

There were a lot of battered and bruised bodies after the game. The team can hold their heads high, they did their country proud, Dennis Gordon was named player of the match but it was such a difficult choice, Philippines now join Turkey Poland and Vanuatu for classification games for the Trophy finals.

After a very tough 2nd game for the team against Nuie, the players were forced to back up 3 days later for a tough Trophy semi-final against a well-rested Turkey, Turkey had the luxury of a week off plus playing a smaller Japanese side.
The team started off rather sluggishly giving away an intercept try in the first 10 minutes. The signs were looking ominous with the players looking tired. So were relieved through continued gifting of penalties through I’ll discipline from Turkey. Enabling the Philippines to work their way back into the game. Tries to Dennis Gordon, Blake Mackey and Paul Sheedy gave the Tamaraws a healthy half time lead, but the job was only half done.

The second half started great with barnstorming try to front rower Ramon Stubbs, followed by a glut of possession. With a further try to diving winger Ned Stephenson made it 28 to 6.

Later tired defence from the Philippines allowed Turkey’s half back scoot 85 meters giving them a sniff, at 28 to 12. However a late Paul Sheedy field goal made it 29 to 12 for a much needed win for the Philippines.

On the down side young half Kieron Wiggings left the field with a jaw injury and played no further part in the tournament. Philippines would go on to play Poland for the Trophy Final.

The day has come, last day of the tournament with a lot of bruised and busted bodies but with their Pinoy pride bearing from their chests today they play a team from Poland who have had a very favourable draw, not really being tested in any of their last three games, their easy semi-final victory over of Vanuatu was a contrast to the Philippines bruising encounter against Turkey.

Once again the Philippines were slow out of the blocks allowing an early try to Poland for them to take a 6 nil lead. The Philippines then tried to get into the game but silly mistakes and silly penalties hampered their efforts. Twice the Philippines dominated in defence and were in great positions only to give away penalties.

Poland’s second try was against the run of play with quick play the balls and some slow blind side defence playing it’s part with Poland 10 nil up.

Moments later if the Tamaraws held the ball, Richie Goodwin’s break almost resulted in a try, only being pulled down metres short of the try line. Another knock on in the play the ball a few plays later led to Poland scoring again in the corner, 14 nil up at the half time break. A 2-7 penalty count did not help the Philippines cause in the first half.

The 2nd half started in the same fashion as the first with the Philippines missing chances. Then about 10 minutes in, veteran fullback Richie Goodwin shoots down the short side to score a try in the corner. Game on for the Philippines, But even with more pressure from the Philippines, the team just couldn’t score tries to finish, Poland when they were on the ropes.

Exhausted then with 15 min to go Richard Malion busts through the line to make it 14 to 10 with a tense finish ahead. Philippines had all the running but couldn’t deliver a knockout blow. A controversial 50/50 penalty call to Poland was given 5 minutes giving the ball to Poland instead of the Philippines getting a drop out.

With just 2 minutes to go a grubber into the in goal from the Philippines bounced to high at the critical moment. Philippines knocked on right under the posts, a try and conversion would of have won them the game at the death but it was not to be.

The players were devastated, but that game typified the Philippines ENWC tournament. A lot of heart, passion and determination being shown coupled with missed opportunities. The Philippine Tamaraws live to fight another day.

The PNRL ENWC was capped off on a positive note with the selections of Dennis Gordon and Vice President and Captain Paul Sheedy in the ENWC team.

With tournament end the PNRL are proud of the commitment, passion and work of all players, coaches, supporting staff, NSW Philippines Consulate, family and friends at this ENWC tournament. Everyone’s sacrifice has truly reflected that the Tamaraws was the Filipino people and International Rugby league enthusiasts’ team at this tournament. For it was through their financial and personal support that allowed the Philippines to compete in this historical Rugby League tournament.