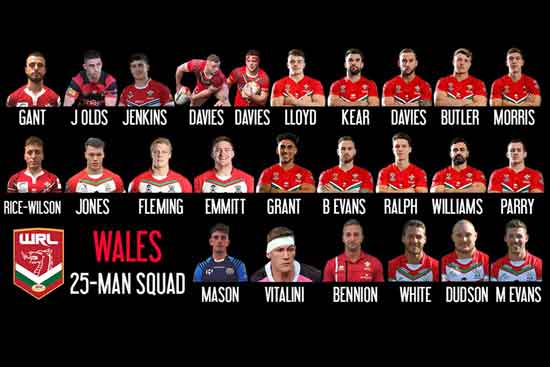 The Dragons will take on France, Scotland and Ireland this autumn as they aim to book their place in the next World Cup at the first time of asking.

Elliot Kear will captain Wales during the tournament and 11 other members of the 2017 World Cup squad will again be involved.

Josh Ralph, who spent the 2018 season with Queensland Cup side Easts Tigers and played a key part in them making it to the Grand Final, will fly over from Australia.

Widnes Vikings’ Gil Dudson and Lloyd White, who were both missing for the World Cup, will be in the frame for a return, as will Halifax’s Dan Fleming and West Wales Raiders’ Morgan Evans.

There are nine uncapped players. West Brisbane Panthers’ James Olds, the brother of international halfback Ollie, will link up with the squad. Twins Connor and Curtis Davies, Sion Jones and Elliot Jenkins, who have all represented Wales at various levels, will also be pushing for appearances in the senior side. Coventry Bears’ Chris Vitalini, Rhys Gant, James Mason and Liam Rice-Wilson are the other players yet to earn a cap.

Wales head coach John Kear said: “There’s a lot at stake in this year’s internationals and we’re all looking forward to the challenge.

“We have a good mix of youth and experience in our squad and it’s really encouraging to see lots of the up-and-coming talent progressing through to the senior team.

“17 of the players in this squad are Welsh-born and that’s something we’re very proud of.

“We have three tough matches coming up against France, Scotland and Ireland, but we want to put in solid performances in each of them and give ourselves the best chance possible of qualifying for the World Cup.”