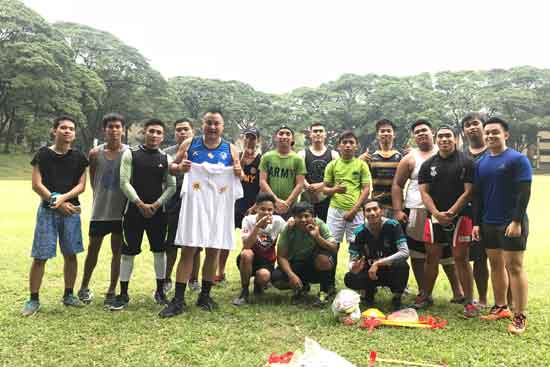 Since the creation of the Philippines National Rugby League (PNRL) in 2012 the International Tamaraw team has relied on the support of family, friends, the players dipping into their own pockets and the Rugby League loving public to field the national team.

This was again evident in the just completed Emerging Nations World Championship. When the PNRL could not find a corporate sponsor to support the Tamaraws. The PNRL reached out to the Rugby League community and asked them for that much needed financial support. With all who contributed thanked with their names inscribed onto the player’s International jersey.

The same support from the Rugby League loving public allowed the financing of the inaugural local competition in 2016.

With the local Estepa Elefante Cup about to commence its 3rd season. Reynaldo Nery an inaugural 2016 player sponsor of Ernest Ganat from the Manila Storm, took it upon himself to travel to the Philippines and present the local teams with much needed equipment for the upcoming local competition.

In appreciation for Reynaldo and others generosity, Ernest Ganat states:

“MANILA, Philippines. In support for one of the world’s most beloved sports, Australian Rugby League sports enthusiasts David Atterton, Marc Atterton, Cristian San Juan, Delilah Hakim, Lisa Bonaldi, Maxx Magan, Mark Bennett and various sponsors have come together to give the sport a much needed boost where it is needed the most.

With the assistance of Reynaldo Nery, a donation of assorted rugby league gears and equipment came all the way from Australia and made its way to the University of the Philippines (UP) Sunken Garden Pitch, where it was handed out much to the anticipation and delight of the beneficiary teams namely the North Luzon Hunters, Manila Storms, and the Cavite Tigers last 14th of October, 2018.
With the main goal of helping Filipinos grow the sport, the mission to donate the much needed equipment has been a success. The beneficiary teams are seeing more playtime with the tools of the game and is being put to good use.

“The donation couldn’t have come at a better time!” Mentioned by one of the players as the timing of the distribution coincided with the upcoming Estepa Elefante Cup local competition within the next coming weeks. With much gratitude, the player-recipients send back their most heartfelt thanks to the sponsors who’ve come out of their way to develop the rugby league in the Philippines”.

The personal financial contribution and sacrifice of individuals wanting to try out Rugby League is not a unique Philippines story. It is actually an all too common story for “The Greatest Game of All” as the sport attempts to lay foundations outside the big three Rugby League playing nations.

Whilst the PNRL awaits for that financial White Knight to assist with cementing “The Greatest Game of All” in the Philippines sporting landscape. It is grateful for the support provided by “Strangers” like Reynaldo Nery who are now a local Philippines Rugby League friend!