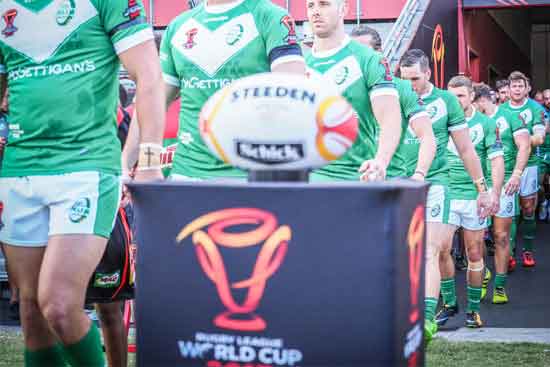 New Ireland head coach Stuart Littler has named his train-on squad for the forthcoming European Championship, which doubles as a qualifier for the 2021 Rugby League World Cup in England.
The top two nations will be granted automatic passage, the bottom two playing in a further qualification group in 2019 which will include Italy, either Norway or Greece, and the top two nations in European B, which will be decided this weekend.

A number of players are included from Ireland’s 2017 World Cup campaign, where the Wolfhounds just lost out in Papua New Guinea to deny them a spot in the quarter finals, together with a group of emerging talent from the domestic competition.

The Irish face Scotland and France at home in Santry before travelling to Wales, and will again be captained by their most-capped player, Liam Finn, who has pulled on the shirt 24 times.

“Once again I feel privileged to captain Ireland and can’t wait to meet up with the squad,” said Finn who will join Wakefield’s coaching staff in 2019 whilst also playing for Newcastle Thunder. “I am excited about these three games, the challenge of the competition and qualification for the next World Cup being up for grabs.”

“What he’s done for us over the last few years has been outstanding – working with limited resources, getting the absolute best out of us as a country and I enjoyed playing for him a lot. He is a massive advocate of international rugby league and helping the sport develop.

“Now we are onto a new chapter with a new coach and we’ll all try to maintain the improvement. It’s great to have Stu involved and, after playing with him for Ireland, I know how enthusiastic and passionate he is.”

At the other end of the age and experience scale, teenager Ronan Michael is included for the first time at senior level having moved to Huddersfield from Longhorns RL.

“Being a part of the Irish squad has been an honour from the very start,” he said. “Singing your national anthem in front of your family and friends is more than most could dream of. I have played with Ireland U17s twice against Wales last year, and with the U19s three times this summer in the Euros.

“I wouldn’t have believed it if someone told me less than two years ago I’d be where I am now. I’m looking forward to getting around the lads in camp, I’m lucky to get the opportunity to learn from the more experienced.”