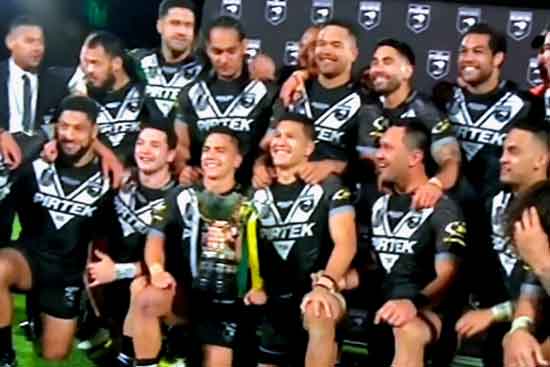 It’s been a long time between drinks for New Zealand in Auckland, 15 years to be exact. After mostly dominating the Kangaroos on the paddock for 80 minutes the Kiwis have held on to win the Trans-Tasman Test 26 – 24

Australia were off to a flying start with Valentine Holmes crossing over for a try just after 3 minutes in what was one of the easiest try’s you will ever see in test rugby league. The Kiwis defence looked so bad you could have been mistaken for expecting a one sided affair. But after a few scares New Zealand went on the attack.

The Kangaroos lost Kleary in the 17th minute when he copped a knee to the head whist trying to tackle Proctor.

For most of the first half the Kiwis continued to put pressure on the Australian’s with a near perfect performance. It wasn’t until the 28th minute that the pressure finally payed off with Ken Maumalo crossing over in the left corner. Then Joseph Manu crossed over 7 minutes later to put the Kiwis ahead 8-6.

In what was a blow for the Kiwis after having 69% possession, Gagai crossed for the Kangaroos in the 40th minute to put the Australian’s back in front 8-12 at the break.

The 2nd half saw the Kiwis snatch the lead in the 54th minute with a try from Brandon Smith on debut via a quick dart from dummy half taking the Aussies defence by surprise.

Just when you thought the Kiwis had the game in the bag Australia hit back with two converted tries in two minutes (76th and 7th Minute) to be within 2 points of the Kiwis 26-24. Luckily for the Kiwis the Aussies left their run too late and the Kiwis held on to win a rare victory over the Kangaroos.

The Kiwis with one win under their belt will now travel to the UK where they will play England in a three test series.