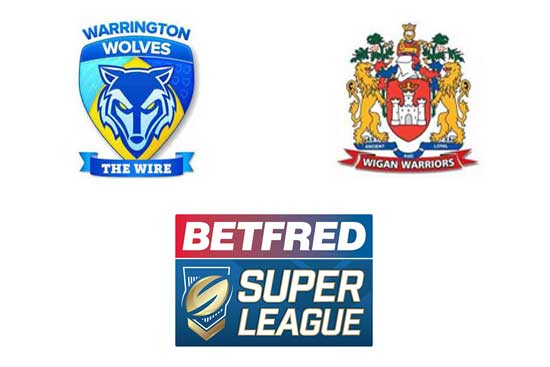 Wigan Warriors will face Warrington Wolves in the Betfred Super League Grand Final for the third time in six years at Old Trafford next Saturday, October 13 (KO 6.00pm) – with the Wolves hoping to make it third time lucky.

Wigan’s 14-0 victory over Castleford Tigers in the second semi final at the DW Stadium last night set up a resumption of one of the game’s fiercest local rivalries, after Warrington’s shock 18-13 win at St Helens 24 hours earlier.

The teams met previously at Old Trafford in 2013, when Wigan won 30-16, and again two years ago, when the Wolves went down 12-6 – their third Grand Final defeat in five years.

It means the Wolves will be chasing their first Super League title next weekend, while Wigan are aiming for a fifth win in their 10th Grand Final appearance.

Grand Final night has become one of the highlights of the sporting year since it was introduced in 1998, and there’s plenty happening in Manchester next weekend.

The Women’s Super League Grand Final will be played across the city at the Manchester Regional Arena adjoining the Etihad Stadium – a 1pm kick-off which is guaranteed to be a War of the Roses showdown, with Leeds facing Castleford and Wigan meeting St Helens in tomorrow’s semi-finals. The Grand Final winners will parade their trophy during the half-time break at Old Trafford.

Eagle-eyed fans will be able to spot Betfred Super League Grand Final taxis across the city, and hail a free ride to Old Trafford.

The newly named Dacia Fan Zone, located outside the North West corner of Old Trafford, will be open from 1.00pm until 5.00pm.

The RL Cares Man Van, operated in association with the Movember Foundation, will also be in attendance offering Rugby League fans the chance to get involved in fun and interesting activities designed to get men engaging with their health.

Once you’re in your seat the entertainment continues as BBC Sport’s Will Perry hosts the match day build up, before Blossoms take to the stage to get the crowd pumped ahead of kick-off.

The match programme will have a striking new look as Chris Moran, a Manchester-based motion designer, has been commissioned to capture the rival captains, on the front cover.

Sporting soprano Laura Wright will perform the traditional Grand Final anthem, Jerusalem, before the teams emerge from the Old Trafford tunnel at the Stretford End of the ground.