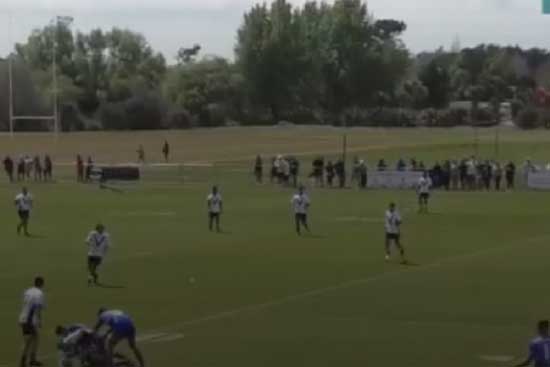 Only minutes later in front of a packed out crowd at Pulman Park, 2017 New Zealand 16s Player of the Year Christian Tuipulotu put his two cents in putting four more points on the board for the NZ Resident 18s, score 8-0.

When looking at the scoreboard, it may have seemed one sided after the first 15 minutes but the Samoans certainly brought the mongrel pushing the Kiwis back to their own line on several occasions but the black and white defence was too strong.

To add salt to the wound, an intercept from Emmanuel Tuimavave-Gerrard saw the Samoans hard work unravel as they were once again forced back to their own 10 metre mark.

Then Kakoi Togoiu came off the bench and his impact was certainly made known. Much like his teammates in the Toa Samoa U18s forward pack, facing his tackles was not too dissimilar to coming up against a brick wall – bone tingling.

As the minutes ticked by, Samoa forced more and more mistakes from the home side, their defence getting stronger as halftime loomed.

In the black and white jersey, Paul Turner had extra incentive to impress with Junior Kiwis Coach, Ezra Howe watching on. After today’s match where he played for the NZ Resident 18s, Turner will play for the Junior Kiwis in their clash against the Junior Kangaroos next Saturday, the first game of the Trans-Tasman Triple-Header at 3.05pm at Mt Smart.

Both teams were kept scoreless in the final 20 minutes of the first half hitting the sheds with the score at 8-0.

A very composed Toa Samoa U18s side looked promising to score the first four points of the second half but a classy NZ defence took him into touch five metres out from the line. But, the Samoans fought their way back to the same spot, their mounting pressure forcing an uncharacteristic dropped ball from NZ fullback Kayal Iro.

On the back of the hard yards done by the Samoans forward pack, the boys in blue put their first points on the board with Devontai Seumanutafa crashing through the NZ Resident 18s defence, score 8-4 following an unsuccessful conversion.

A second try only minutes later looked imminent but a double movement called for a line drop out instead.

On the back of a few mistakes, NZ came up with the ball in hand, Temple Kalepo seeing space to score under the posts. 12-4 turned into 14-4 when converted by Emmanuel Tuimavave-Gerrard. Paul Turner then joined in on the fun scoring his second try of the day, once again converted by Tuimavave-Gerrard taking the score to 20-4.

Then, just what the Toa Samoa U18s were hoping for, a cross field kick sent fullback Jonaiah Lualua across the chalk, the score remaining 20-8 following an unsuccessful conversion.