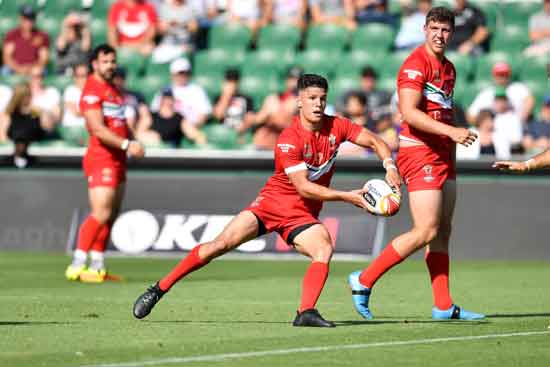 Josh Ralph will fly over to Wales from Australia this autumn to take part in the European Championship and 2021 Rugby League World Cup qualifiers.

Wales face France, Scotland and Ireland and the full squad for the tournament will be announced on October 18.

This will be the second time that Ralph, who is Australian by birth and qualifies to play for Wales through his grandfather, has been called up by John Kear.

He made his debut in the defeat to Ireland at last year’s World Cup in his homeland and instantly made an impression.

Following the World Cup, he signed terms with Queensland Cup side Easts Tigers for the 2018 season.

Although he broke his jaw in round two and missed a large part of this year, he soon made an impact when he returned to action and scored a hat-trick for the Tigers in their 32-0 play-off win over Northern Pride.

“I had a really good pre-reason and played in round one, but I then picked up the injury and missed 14 weeks,” Ralph said.

“I lost about six kilograms, which isn’t ideal, but it’s one of those things and I’ve now put that weight back on. I’m back to normal now.

“Once I was fit again, I really found form and we managed to get all the way to the final.”

When Ralph links up with the squad later this month, it’ll be the first time he has visited Wales, but he is very proud of his heritage and can’t wait to pull the red jersey back on.

“I was excited when I found out I was going to play my first game at the World Cup,” he said.

“I knew I could go in and do a job so I was really pleased when John gave me the call to say I was playing.

“I’ve been in talks with a couple of clubs for next year and one of my conditions is that I’m going overseas for a couple of weeks to play for Wales.

“I’ve got a lot of pride for Wales and it means a lot to both myself and my family.

“Some players would prefer to have a rest in the off-season, but I want to be out there playing and representing Wales.”