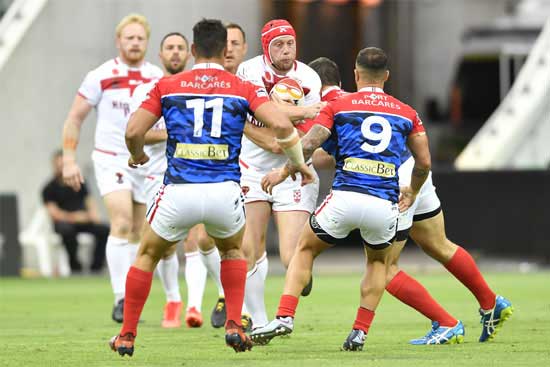 Wakefield Trinity team-mates Tom Johnstone and Reece Lyne are among five uncapped players in the 24-man England squad that has been selected for this autumn’s internationals against France and New Zealand.

Johnstone, a 23-year-old wing who has scored 24 tries for Trinity in the Betfred Super League this season, and Lyne, a 25-year-old centre who joined Wakefield from his hometown club Hull FC six years ago, are joined by the St Helens prop Luke Thompson; Joe Greenwood, the Oldham-born former Saints forward who returned to the Super League this season with Wigan after a stint with Gold Coast Titans in Australia; and Adam Milner, the long-serving Castleford forward who is the oldest of the uncapped quintet at 26.

For Lyne, Greenwood and Milner, this is promotion from the England Knights squad that was selected earlier this summer – with the Knights squad for the forthcoming tour of Papua New Guinea to be named tomorrow (Wednesday).

The autumn internationals will be England’s first on home territory since they reached the final of last year’s World Cup, having since beaten New Zealand 36-18 in Denver in June.
England play France at the Leigh Sports Village on Wednesday October 17, then a three-Test series against New Zealand – at the KCOM Stadium in Hull on Saturday October 27; at Anfield in Liverpool on Sunday November 4; and at Elland Road in Leeds on Sunday November 11.

“The England team have an attractive and important series of matches this autumn, and the players are relishing the prospect of representing their country in front of home crowds again,” said head coach Wayne Bennett.

“It’s important that we build on the positive work of the last couple of years, including last year’s World Cup and the Denver Test, against what we’d expect to be the usual stern challenge from the Kiwis.”

Six members of the World Cup final team were ruled out by injury – Gareth Widdop, Kallum Watkins, Ryan Hall, Ben Currie, Alex Walmsley and James Roby, the St Helens hooker who will have surgery at the end of the Super League season.