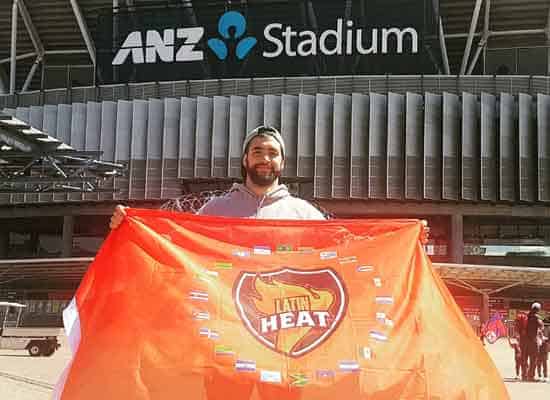 It’s 6am on a Saturday morning and Argentinian Francisco ‘Pancho’ Gaspani is waking up on a mattress on the floor of a granny flat in Fairfield, in Sydney’s western suburbs.

While other Latin American travelers of his age are just arriving home after a night out, or rising to surf on the Eastern Beaches, Gaspani is searching YouTube for footage of Cameron Smith.

“I want to learn from the best player in the dummy-half position,” the 26-year-old says matter-of-factly.

It is three days since Gaspani has landed in Australia and one day before the NRL grand final.

His purpose is to play in the Emerging Nations Rugby League Championship, where he will feature for a combined Latin American team in a special regional pool that highlights exponents from far-flung corners of the globe.

‘Pancho’ has been offered a beer each day since arriving, but politely refused.

The nippy ball-player has already scoured the neighbourhood for local rugby league fields, he has identified the nearest gym, and has visited Peter Wynn’s Score sports shop in an elusive quest for some Brisbane Broncos shorts and X Blades boots in his size.

Just buying rugby union equipment – let alone rugby league gear – in his provincial Argentinian hometown of Mar Del Plata (which translates to ‘The Silver Sea’) can be an ordeal, despite the Argentines enjoying fame in the 15-man sport.

While you might find a few select rugby stores in Buenos Aires, for those outside the capital, most things need to be ordered via the internet.

The Argentinian peso has also taken a dramatic dive against the dollar recently, making the equation even more difficult.

Gaspani is pragmatic about the relationship between rugby league and rugby union.

He has an appetite for both and has previously travelled to Spain, France and England to play union.

His interest in league has been sparked through his association with fanatical and tireless national administrator Carlos Varela, who lives 45km south of Mar Del Plata in the tinier locale Miramar.

Their coastal region is a popular summer getaway spot, not only for Argentines, but those from across South America and Europe.

Gaspani has taken a leading role in establishing Costa Atlantica Rugby League, one of two rugby league federations which operate in Argentina, the other being further north in Entre Rios, which borders with Uruguay.

To participate in the Emerging Nations tournament, Gaspani has left behind his eight-month-old daughter and his partner Florencia – no thoughtless sacrifice.

He wants to soak up as much information about rugby league as possible during his brief 17-day stay.
Argentina has only played two full international rugby league matches to date – a win over Colombia and a loss to Chile in the final of the 2017 Latin American Championships.

There’s no doubt, in a country of 100,000-plus hardened rugby union players, that the potential for greatness is there, but attempted inroads have been fairly limited until recent years.

Aside from Argentine players, the Latin American squad for the Emerging Nations event includes those with backgrounds in Chile, El Salvador, Colombia, Brazil, Peru, Mexico, Uruguay and Guyana.

At the pointy end of the stick you have former Super League player Matt Gardner and ex-State League player Kevin McKenzie, ranging right through to players who have mostly played nine-a-side league in their homelands.

Some players, like Pancho, have flown in especially for the tournament.

There are others who have arrived in recent years as students, some who migrated to Australia as wartime refugees, some who were adopted from Latin America as children, and others who had parents who sought a better life on the opposite side of the Pacific.

Together they may seem a ragtag bunch cobbled together in the same way that West Indies represents the islands of the Caribbean all at once.

But over the past five years, the outfit, known commonly as Latin Heat, has made a real impact by transferring the passion back to their homelands.

Each time a player trains or plays, his cousins, former classmates and friends back home in Latin America catch a glimpse of this dynamic, spectacular sport via social media and the internet.

It is much the same way that Lebanon was taken in by the grip of the sport, leading to their domestic competition, then to them being 2017 World Cup quarter-finalists.

Latin America’s first game will be Sunday, October 7 at Cabramatta RLFC against a regional team from the Middle East, which includes players of Iraqi, Irani, Syrian, Palestinian and Afghani backgrounds.

They will then play a South-East Asian team comprised of players from the likes of Vietnam, Cambodia, Laos, Hong Kong, China, the Philippines and Indonesia.

And finally they are up against an Africa United side which draws on players from nations such as South Sudan, Egypt, Nigeria, Ghana and the Cameroon.

Their competition will run in-line with the main tournament of sovereign nations, which began on Monday with appearances by Hungary, Greece, Malta, Philippines, Turkey and the Solomon Islands.

Origin with a twist comes to the Sunshine Coast