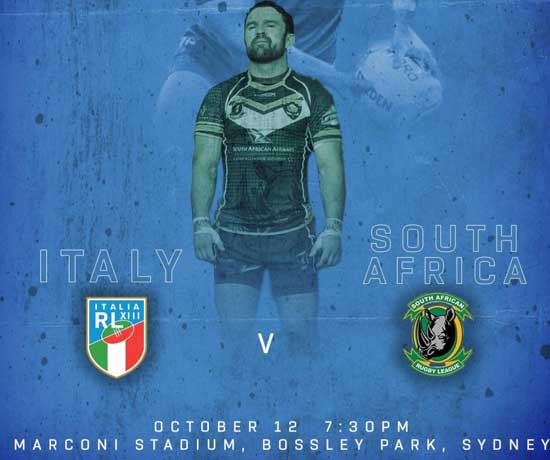 This October in Sydney, South Africa and Italy will meet again for a rugby league test match. The game will be played at Marconi Stadium, Bossley Park on Friday October 12th 2018. Kick off is scheduled for 7.30pm.

The last time these two teams met was back in June 2006 when the South African Rhinos left their shores for a two test tour of Italy The Rhinos were successful back then but much has changed in the rugby league World for both countries over the last 12 years.

South Africa took part in the 1995 and 2000 Rugby League World Cups. Since then they have missed out on qualification but are looking to throw everything they have at qualifying for the 2021 RLWC.

Italy on the other hand took part in the 2017 Rugby League World Cup and will be looking to qualify for the 2021 instalment. Italy will be fielding a team of talented young players of Australian /Italian heritage.

As was the case with the South Africa / Malta test back in June, the Rhinos will be drawing on players from South Africa, Australia and New Zealand as they continue to build towards 2021 Rugby League World Cup qualifiers. The Test will be an opportunity for both countries to develop their players for their respective RLWC 2021 campaigns.

The match will be live streamed. The link will be posted shortly before kick off on the South African Rugby League and Italian Rugby League Facebook pages