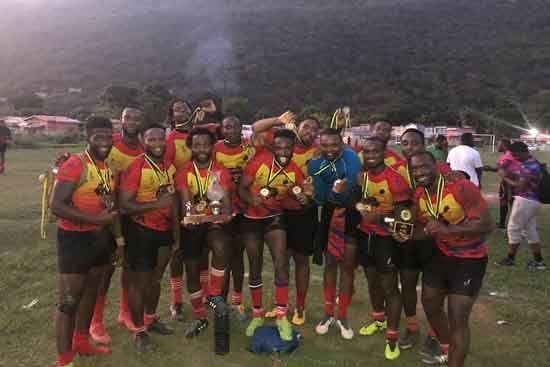 Duhaney Park defeated the Jamaica Defence Force Warriors 56-12 to be crowned RLATG National Club Champions. In so doing, the Red Sharks have now won the Championship a record 6th time.

Played in front of large and energetic crowd at the Duhaney Park Mini Stadium, the Red Sharks dominated from start to finish on the back of sublime passing and running from their speedy centers and wingers. They were comfortably ahead 28-6 at half time, and the second half saw them continue to dominate all aspects of the game.

For the JDF, Ramone Carr scored a try and kicked a goal to accumulate 8 points; he got support from Demone Williams who managed try as well.

Winning assistant coach Roy Calvert commented:
“This was really a challenging year for us. We spoke about history before the game. This is our third time meeting the Warriors in a Grand Finals, we lost the previous 2. We wanted to be the first club to win 4 in a row and also the first to win 6 NCC titles. Some really meticulous plans went into making this season successful and we are proud of the boys.”

The Local club scene now switches focus to the National Knock-Out Cup that begins next Saturday and the National Division 2 Championship that commences the end of October.