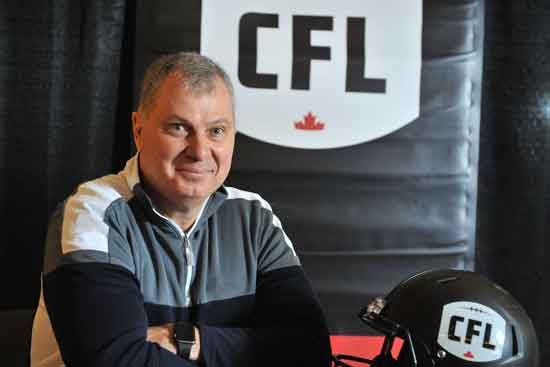 As we reported in our original article in July there appears to be more common ground between rugby league and Canadian Football than one might expect.

Apart from both being codes of football, one of the main similarities is that the powers-that-be in both codes have identified the need for global growth of their respective games.

In line with that, if Canadian Football League commissioner Randy Ambrosie is successful in his push to expand the game internationally, the CFL could become a genuine option for rugby league players.

The commissioner calls it CFL 2.0 and his idea is to build partnerships with gridiron football leagues in non-traditional gridiron countries such as Australia.

The plan is to create opportunities for young Canadians who have finished university or junior programs and who haven’t landed contracts with CFL teams to hone their skills in those countries, and while that wouldn’t necessarily benefit Australians, the second part of the proposal just might.

Ambrosie is keen to introduce a global, or international, roster spot on CFL teams so crossover athletes from other countries could be recruited to play in Canada.

There is an Australian currently playing in the CFL – Josh Bartel is a punter with the Saskatchewan Roughriders, although he’s an ex-AFL player.

Back in the early 1970s, former Eastern Suburbs Roosters centre Mark Harris was a kicker for the CFL’s Montreal Alouettes after trying out for NFL team the Philadelphia Eagles. He returned to the Roosters and played for the Kangaroos in the 1975 Rugby League World Cup, before finishing off his career with the North Sydney Bears.

More recently of course, Jarryd Hayne had a stint with the San Francisco 49ers in the NFL and if he’d stuck it out, who knows, he might’ve become a regular starter for the 9ers.

So, the question is, do rugby league players have what it takes to make it in the CFL? According to two Canadian Football players we spoke to the answer is yes.

Pat Neufeld, an offensive lineman with the Winnipeg Blue Bombers, says they absolutely do. And he should know as he played rugby before turning pro.

“It was the first contact sport I ever played,” he says.

“I played till I was about 16 or 17 years old and then I made the switch over to football because I could get a scholarship to university playing football. So, that was the decision, it was education based.”

As for a league player’s potential suitability to CFL, Neufeld thinks they could make the transition without too much difficulty.

“Rugby players are such phenomenal movers and such great athletes that I think it would be uniquely catered to their skill set.

“They have such a great sense of athleticism that the skills they have are easily transferrable to Canadian Football.”

His Winnipeg teammate, fullback John Rush, agrees and like the big lineman he too played rugby before taking up football.

He thinks Ambrosie’s idea of bringing crossover athletes to Canada to learn CFL has potential.

“It would be great for other countries to see guys coming over here playing our game and doing well,” says Rush.

“It opens up doors for more players to adopt the game and that makes the game bigger and better because you’re getting players from all over the world that are the best athletes in the world playing Canadian Football.

“I think it’s an amazing opportunity to open up a spot like that and have access to different parts of the world that we really wouldn’t have access to otherwise.”

Rush believes the key to growing rugby league in Canada is to get it included as a school sport, particularly in the lead up to the 2025 Rugby League World Cup, assuming the RLIF doesn’t change its mind and take it away from North America in the wake of the Denver fallout.

He says introducing the game to more kids would help it take off.

“If we were able to start at the grassroots where the youngest kids start playing and learning the sport and enjoying the sport, I think that would be a really great opportunity for those young kids to see the sport live and at the highest possible level.”

Ambrosie tabled his plan Friday at the CFL board of governors meetings.

You can hear the entire interviews with Neufeld and Rush on Episode 11 of the USA Rugby League Show podcast (Click Here).