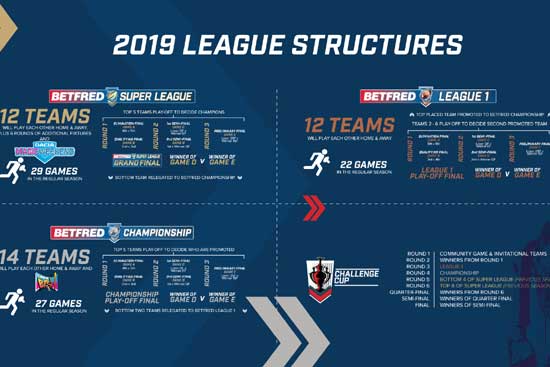 At the Rugby Football League Council meeting, the proposed agreement between the RFL and Super League (Europe) Limited relating to a range of issues including: removal of the Super 8s for the 2019 season; guaranteed promotion and relegation to Super League; and funding to and beyond the current broadcast deal was supported. The ballot supported the proposal by 68% of votes cast.

Following the Council ballot, the Rugby Football League Board has met and confirmed that it will now move forward with Super League (Europe) on the above basis.

The Rugby Football League and Super League (Europe) have evolved the Super League structure for 2019 onwards and ensured game-wide financial and partnership commitments.

The Betfred Super League structure guarantees one-up, one-down pomotion and relegation in a 12-team competition. All teams will play each other once home and away, plus six additional fixtures and the Dacia Magic Weekend, ending with the top five teams in a play-off series which culminates in a Grand Final to crown the Super League champions at Old Trafford.

Separate discussions between Championship and League 1 Clubs on the proposed structure of those competitions is ongoing and a further announcement will follow shortly.

The revisions follow substantial discussions within all levels of the professional game, led by the Rugby Football League.

Ralph Rimmer, Chief Executive, The Rugby Football League; “Today’s announcement is about a number of things: structure simplification, funding certainty, shared responsibilities and growing the sport together with clearly defined responsibilities. It follows a scheduled mid-cycle review and substantial negotiation. The Rugby Football League governs the whole game. Its focus throughout has been securing clear commitments for the whole sport post-2021 so that the sport has certainty and can move forward, focused on growth.

Structure is one of many vital components of any sport. Everyone is focused on a vibrant and successful Super League, and Championship and League 1. We have secured guaranteed promotion and relegation to and from Super League. It is essential that aspiring clubs, owners and fans can see their path to the top. We can now move forward and focus on all the areas which contribute to a strong, thriving sport.

Rugby League has outstanding assets including all competitions, the Challenge Cup, the community game and England.

It is vital that we now draw a line under the last period; and focus our collective energies on promoting the sport and the fantastic players on the pitch who should be the ones making the headlines. The whole sport has a massive opportunity in the home World Cup in 2021. All of us now need to look forward together and focus on the job in hand.”

Throughout this process Super League (Europe) has worked with the Rugby Football League and will continue to do so to strengthen and grow the game. This has been a professional and tough negotiation. We have clear accountability and duties as Super League (Europe), and the Rugby Football League as the governing body for the whole sport, which enables a sharper focus for both organisations.

We share the same drive and commitment to progress the sport and look to 2019 with confidence and excitement.”

The Betfred Championship structure expands to a 14-team competition in 2019 with all teams playing each other once home and away, plus Summer Bash, ending with a play-off series for the top five teams with the winner promoted to Super League, and relegation for the bottom two clubs.

To get to a 14 team Betfred Championship at the end of this current season two teams from Betfred League 1 will be promoted. As has always been planned this season, the team finishing top of League 1 will be automatically promoted.

Betfred League 1 will consist of x12 teams playing each other home and away with the top team automatically promoted. Teams 2-6 will play-off to decide the second team to be promoted.

The revisions follow substantial discussions within all levels of the professional game, led by the Rugby Football League.

Ralph Rimmer, Chief Executive, The Rugby Football League; “As we have seen this season, the Betfred Championship and League 1 are strong, vibrant and highly entertaining competitions.

We want to see both competitions continue to appeal to Rugby League fans and attract new ones. We have secured guaranteed promotion and relegation to Super League. It is vital that aspiring clubs, players, owners and fans can see their path to the top.

We want to ramp up how we build value in Championship and League 1. This means more marketing and promotion including major focus games; streaming more games as part of a wider digital strategy – already underway with the streaming of Betfred League 1 games exclusively to Our League members; and working with broadcasters to bring these competitions to a wider audience. It also means focusing the investment where it delivers the greatest return for the sport.

We need to now draw a line under the last period and focus on this together as we head to a home World Cup in 2021 and all the opportunity this brings to our clubs and communities.”