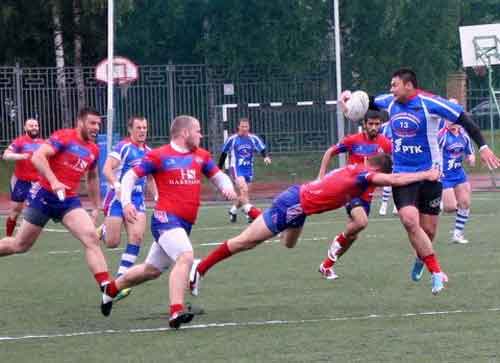 Russia, Serbia and Spain have named their initial, extended squads for October’s European Championship B, which doubles as a qualifier for the 2021 Rugby League World Cup in England. The top two nations will join Italy, the winners of Euro C and the bottom two nations from the European Championship in a final qualifying tournament in a year’s time.
Spain host the opening game against the Russians in Valencia, with Russia making their bow a week later.

Palau Bronco’s Alexandre Doutres, who has been part of the Spanish national team for three years, commented: “Rugby league is pretty undeveloped in Spain and it has only been a short road so far, but the implication of these games for the volunteers, leaders, players, and staff is huge.

“You will find few more passionate than them and it is thanks to their efforts that rugby league is gradually gaining in popularity in Spain; aside from the national team, the level of the domestic players is going from strength to strength.

“The October matches are very important for us in light of the RLWC qualifying. It is essential for the development of our sport here that the national team shines – something that can be achieved through qualifying for a World Cup.”

Included in the Spanish squad are two French internationals with heritage, hooker Eloi Pelissier, currently with London Broncos, and Newcastle Thunder half back Remy Marginet.

The Russian squad is made up of players from ten domestic sides, four of them from the Moscow. Dynamo’s Eremin Viacheslav, who has recovered from a knee operation after last year’s finals, said: “I was very surprised by the call from head coach Denis Korolev and when I heard that I was a candidate for the Russian national, I was very happy.

“It’s a great honour. At a time when I sing the anthem, I feel that I am an integral part of such a great power. I will look to defend its honour at the world level and cannot fall with my face into the mud.”

Serbian captain Dalibor Vukanović is anticipating a test of the progress of his country. “It’s always exciting when we’re starting a new qualification cycle,” he confirmed. “We have a good and experienced team, with also very talented additions from our youth side that did well in the European U19 championships in Belgrade.

“Our reputation probably makes us favourites but we highly respect Russia and Spain, so we need to put in hard work to progress further in World Cup Qualifications,”