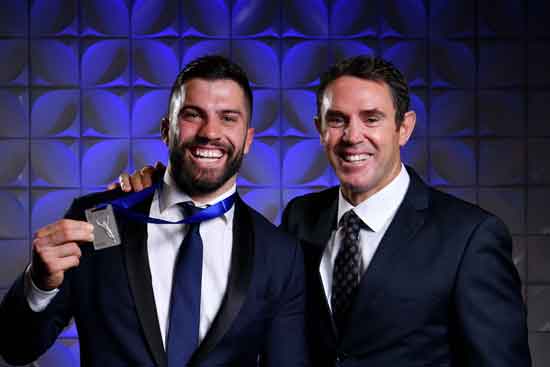 Electrifying Brydens Lawyers NSW Blues fullback James Tedesco has tonight (10 September) been crowned the 2018 Brad Fittler Medal winner following an impressive State of Origin campaign in which he made more tackle breaks and post-contact metres than any other player across the three-game series.

Tedesco, who is enjoying a stellar season with NRL minor premiers the Sydney Roosters, made 25 tackle breaks and ran for 504m, including 145.3 post-contact metres, after starting in all three games for NSW. He finished ahead of team-mate Josh Addo-Carr (22) in tackle breaks; and edged out Queensland winger Dane Gagai (145.2m) and Maroons captain Greg Inglis (138.8m) in post-contact metres.

Tedesco started the 2018 series at the MCG in Melbourne in devastating form with Man of the Match honours and a State of Origin record 17 tackle busts, beating a 28-year-old record held by Queensland fullback Gary Belcher who notched 16 in 1990, also in Melbourne.

Tedesco accepted the state’s top award, the Brad Fittler Medal, in front of more than 600 guests at The Star Event Centre, on a night that recognised the achievements of players across all NSWRL teams and competitions, from Origin to seniors, juniors, women and Indigenous, as well as the contributions of referees and club officials.

Tedesco said: “I’m very honoured to receive this award … I’m so happy to have won the series, I loved every minute of it. This Medal tops it all off.

“It’s definitely one of the best years of my life… We didn’t often look at the papers or read the articles… but now that it’s all said and done, it’s pretty special to reflect.”

In his debut year winger Tom Trbojevic (Manly-Warringah Sea Eagles) claimed the True Blue Award, won last year by brother Jake, for the player who displays qualities upon which the team culture is built.