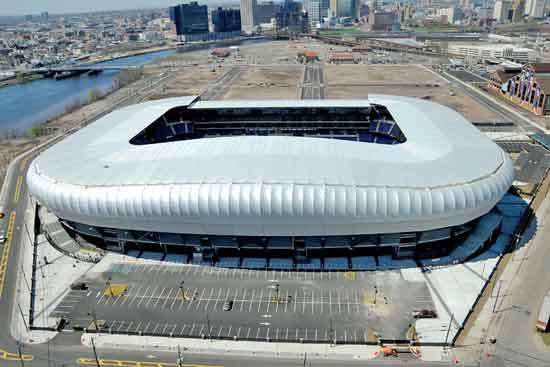 Despite plans for next month’s Australia versus Tonga Test match in New York being shelved, the main group behind it says the concept still has legs.

The international match, along with the USA Hawks playing an undetermined opponent in a curtain-raiser, had originally been planned for October 20 most likely across the Hudson River at Red Bull Arena in neighboring New Jersey.

The group that originally proposed the international doubleheader is the same one that is behind a bid to establish a new RFL team based in New York, along the lines of what the Toronto Wolfpack have done.

They took the proposal off the table in late August and according to spokesperson Ricky Wilby that was because they felt that time had run out in order to get everything done in the lead up to the event.

“There were a few things that led to it not going ahead,” he says. “The main one really was the time issue.

“We got to eight weeks out from the event actually going to take place and we still hadn’t crossed the T’s and dotted the I’s and it was just going to leave us too short a time scale to sell tickets and promote it effectively.

“We were really keen on this being a big splash for the (New York) bid team and also for the NRL. The last thing that all of us wanted was for it to go ahead and for us not being able to put on the event as well as we wanted to.”

Wilby goes on to say that it was always going to be a short turnaround anyway from the time the proposal was tabled until the matches were played, but the eight-week time span they were left with was too much of a stretch.

However, he says all is not lost and the doubleheader could still go ahead, perhaps in 2019.

“The NRL is keen to work with us moving forward, which is a real positive from all the negotiations.

“So, we’ve already tried to put some plans in place for something, possibly next year, which will all be revealed in due course.

“We’re working hard behind the scenes to make sure this isn’t a one-off, but a long-term goal, not just for the New York rugby league bid team, but also for international rugby league moving forward in the States.”