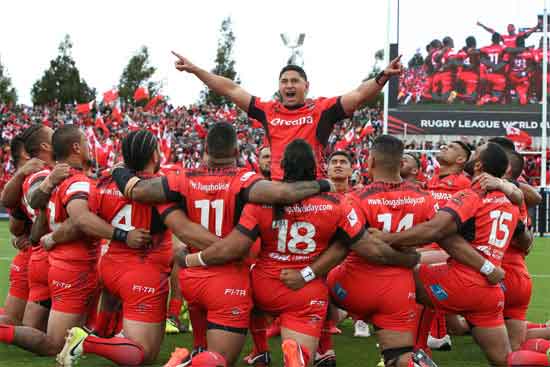 In a joint New Zealand Rugby League (NZRL) and National Rugby League (NRL) announcement today at the NZRL headquarters, two major new international fixtures have now been confirmed to be played in New Zealand.
Tonga will play Australia at Mt Smart on 20 October, and then will return to face New Zealand in June 2019.

“Kiwi fans have waited a long time, and it is great to be serving up such an exciting schedule of international matches.”

Talking about the Kiwis match-up with Mate Ma’a Tonga in New Zealand during the June representative window, Peters said: “The Kiwis playing Tonga on home soil is a Test Kiwis fans and the New Zealand Rugby League community have been looking forward to,”

“International rugby league is the pinnacle of our game and these Tests are another step towards developing the international calendar.

“Many of the Tongan and Kiwis players have grown up playing rugby league in the New Zealand Rugby League pathways so it’s fantastic that these players can return to home soil, to play in front of family and friends,” Peters said.

We will be engaging with key stakeholders over the coming months to determine the venue of the Kiwis v Tonga match.

This Test will replace the Kiwis v England annual Tests which were set to go ahead in Denver in 2019 and 2020.

Head Coach of Mate Ma’a Tonga, Kristian Woolf is also in high spirits about the Test and believes the opportunity to play the Kiwis will be a well-deserved reward for his players.

“We (Mate Ma’a Tonga) have been very vocal about wanting to play other tier one countries. It’s a wonderful opportunity.

“We believe the Kiwis v Tonga Test in New Zealand will generate a lot of support from both fanbases and we look forward to the prospect of a long-term relationship with the New Zealand Rugby League,” Woolf said.

“This is a fantastic result for all fans of rugby league and the continued growth of the international game,” he said.

“Many people have worked tirelessly right around the globe to ensure this match takes place.

“I’d particularly like to thank the NZRL for their efforts to ensure this match eventuated on New Zealand soil, along with the RLPA and the players.

“Tonga are the fourth-ranked team in the world and have fully-earned their right to take on the World-Champion Kangaroos.”