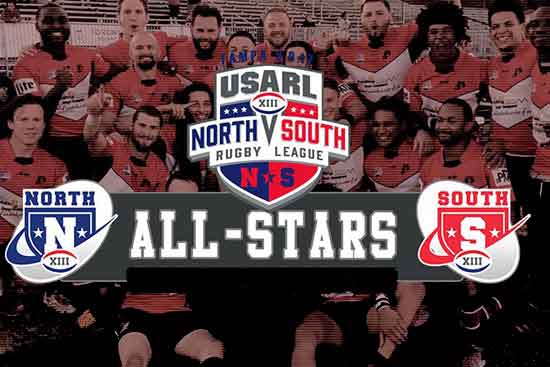 As celebrations wind down in the wake of the 2018 USA Rugby League national championship, attention is now turning to the USARL’s annual NORTH versus SOUTH All Star game.

The match is seen as a way of showcasing the best of America’s rugby league talent to cap off the domestic season.

Initial squads have been selected from both conferences and each has a fair smattering of players representing all teams in the competition.

The Brooklyn Kings and Philadelphia Fight dominate the NORTH with six players each as they finished the regular season in the top two spots in the conference standings, while the White Plains Wombats have the next highest number of players with four after reaching the conference championship.

One notable absentee from the NORTH squad is New York Knights forward Josh Rice, however, it has nothing to do with his form. Rice has moved back to his native Hawaii where he hopes to help revive a Hawaiian Conference.

The original Pacific Conference had its origins in 2011 as an expansion by the previous national governing body the American National Rugby League (AMNRL).

That aside, after scouting many games during the regular season, the NORTH’s coaching staff have picked what they feel is a competitive squad.

“We’ve been pretty transparent from the start of the conference’s competition this year on our selection process giving everybody the opportunity to be a part of the All Stars squad,” says head coach Brent Richardson.

“This side really rewards some really good individual efforts, but also some really strong performing teams this year as well.”

The new national champion Jacksonville Axemen and Tampa Mayhem, with six each, have the most players on the SOUTH squad closely followed by the Southwest Florida Copperheads with five, while the Atlanta Rhinos have four.

“What Brent and I need to see is these players up against each other in a better environment. The best of our boys up against the best of theirs and they need to be under pressure so we can see how they perform.”

Rutgerson and Richardson are the coaches for the USA Hawks, who will take on Canada, Jamaica and Chile in the 2021 Rugby League World Cup Americas region qualifying series in November.

The All Star game is slated to be played on Sunday, September 9 in Conshohocken, PA, the home of the Philadelphia Fight.