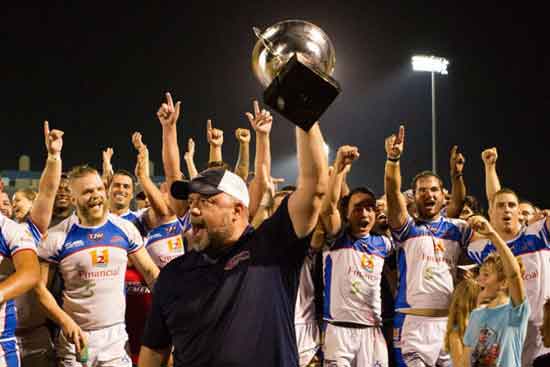 The Axemen trailed briefly just once during the match before clinching a 56-16 victory against the Brooklyn Kings in the USARL championship game.

And as has been the case all season long, their Australian import hooker and goalkicker Lachlan Bristow was the star of the show in amassing 36 points on his own.

He scored no fewer than five tries and booted eight conversions as Jacksonville went on to outscore Brooklyn by ten tries to three.

For their part, and despite being outplayed on the night, the Kings didn’t stop trying for the whole 80 minutes and made the final scoreline somewhat more respectable with two late tries.

Repeating a pattern that has been the norm this season, the Axemen scored first when right winger Tyler McClain dotted down within the opening minutes. Bristow missed with the conversion for an early 4-0 lead.

Brooklyn hit back within minutes when one of their main playmakers Jerome Easthope forced the ball over the line after sustained Kings pressure. The extras were added to give the visitors a temporary 6-4 lead.

However, they didn’t stay in front for long as the home team scored five more tries in the lead up to halftime.

Bristow got three of them, while McClain picked up his second and fullback Will Fletcher scored one. Bristow converted all five tries to give Jacksonville a huge 34-6 lead at the main break.

Brooklyn had its chances to close the gap during the first forty minutes when both center Brandon Anderson and fullback Seimou Smith uncharacteristically spilled the ball with the try line within reach.

As has often been the case in 2018, the second half was pretty much a repeat of the first forty with the Axemen forging their way to the win with four more tries.

The Kings, who might have thrown in the towel, instead stepped up their pressure and were rewarded with two tries, one of which was converted, to make the final scoreline of 56-16.

“I’m really proud of all the players and how they went and just happy to get the win,” said Jacksonville head coach Sean Rutgerson.

“We capitalized on quite a few of their mistakes, which put the pressure on. We had a couple of special efforts out of the team and that’s what you need in a grand final.”

It is Jacksonville’s third national championship adding to titles they won in 2010 and 2012.

In all, the Axemen have now made seven appearances in national championship games dating back to 2009.

For the Kings, it was their first time playing for a USARL title.

“We were undefeated all season and I thought we were a good chance down in Jacksonville,” added head coach Brent Richardson.

“I thought we prepared really well as a team.

“Errors defensively, as well as with the ball, is the opposite of what we built the season around which has really been built on defense. Full credit to Jacksonville, they’re a good side.”