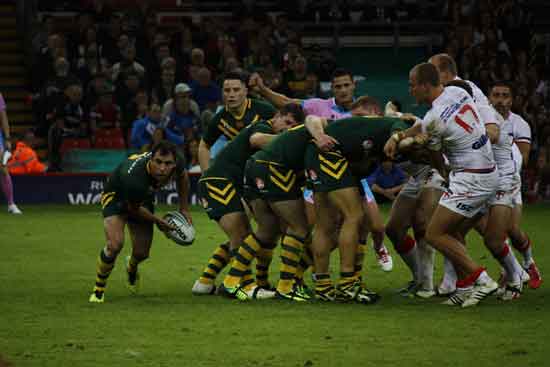 The Rugby League International Federation (RLIF) has confirmed an agreement has been reached for the Australian rugby league squad to tour the UK in 2020, with the British and Irish Lions to tour the southern hemisphere in 2019. The Federation met in Singapore earlier this month to discuss the scheduling of tours in the coming years.

The Kangaroos were keen to visit the British Isle in 2019, rather than hosting the British Lions next year. It was one of many proposals put forward to the RLIF by Australia Rugby League (ARL) chairman, Peter Beattie. It has been 15 years since the Kangaroos last toured the UK solo and Beattie believes a visit is long overdue. Beattie also submitted suggestions for two separate Four Nations Series to be hosted in 2020. The Kangaroos would face-off against New Zealand, Samoa and Tonga in a southern hemisphere series, while England would encounter France, Fiji and Papua New Guinea in a northern hemisphere tournament.

Kangaroos fans thinking of travelling over to the UK in 2020 to watch the action and soak up the sights and sounds of the British Isles will need to know dates and plans sooner rather than later. In terms of sporting entertainment after the final whistle of each tour match, sports fans will have plenty to keep them occupied. The English Premier League will be in full swing, along with the UK National Hunt horse racing. However, those who enjoy placing horse racing bets on thoroughbreds across Australia will still be able to do so from the UK with a Unibet account.

In terms of rugby league becoming a truly global sport like football and horse racing, Beattie believes there is a genuine “revival of interest in international rugby league” and the ARL’s proposals to the RLIF were designed to breathe new life into the sport in both hemispheres. The decision to keep the British and Irish Lions tour to 2019 will be disappointing news for burgeoning rugby league fans in the United States. The city of Denver played host to an historic test match between England and New Zealand, with the former running out comfortable 36-18 winners in front of a crowd of almost 20,000 in the Mile High Stadium.

Rumours were abound that staging another test match in 2019 was possible, but the Lions’ tour Down Under almost certainly puts paid to those plans. Rugby League is certainly taking off in the US in a big way, with its own Rugby League National Championship reaching an exciting climax this month.