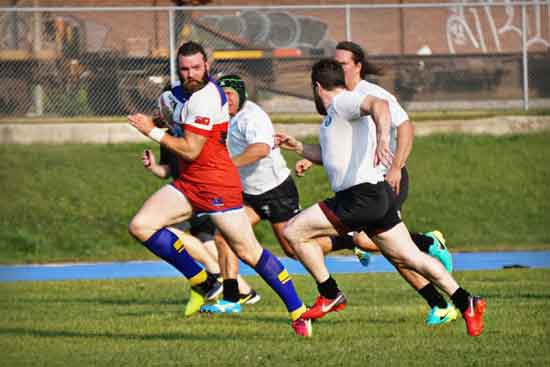 Buoyed by the success of this summer’s exhibition games in Chicago, the Midwest Rugby League (MWRL) is already looking ahead to 2019 to broaden its horizons by setting up matches with teams from the western United States.

The MWRL is in preliminary discussions with folks in California and Idaho about hosting games in Chi-town.

“Both are looking to do what we have done in Chicago,” says MWRL CEO Mike Featherstone.

“We have presented an offer to each of them whereby we’ll have a venue, ref and set of uniforms waiting for them if they can get a couple of cars full of guys over here to Chicago next summer.

“It’s just up to these guys to get here.”

This comes on the heels of two exhibition games in the Midwest in July and August where the Chicago Stockyarders hosted visiting teams from Cleveland and Ontario.

The match against the Cleveland Rugby League squad was played under a Nines format, while the game against the visiting the Canadian provincial team was a regular 80-minute contest.

“We envisage putting similar games on to the game held with Cleveland (9-a-side) even if we have to give them a few guys to make the team up to help get them up and running and some exposure,” continues Featherstone.

“We’ll also look to continue developing the first grade side of things with a visit to Canada hopefully for a return fixture with Ontario RL.

“Our hope is that Cleveland will be ready for a full 13-a-side first grade game with us next year and we can keep building towards that four-team conference.”

As we have previously reported, ideally the MWRL would like to establish an expansion Midwest Conference to become part of the USA Rugby League’s national competition by 2020.

That conference could conceivably include teams from nearby Joliet, Illinois, plus Cleveland and Ontario along with the Stockyarders.