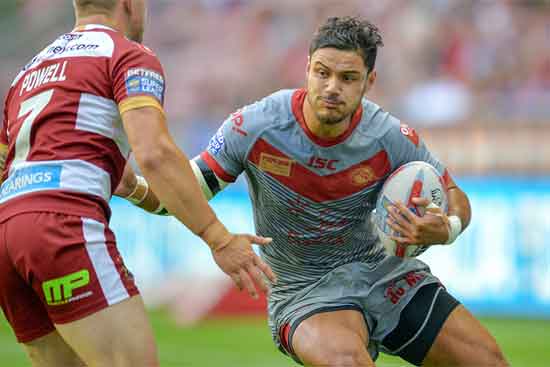 After nearly a three week wait, Catalan Dragons and Warrington Wolves finally get to step foot on the Wembley turf to contest the 117th Challenge Cup Final.

Saturday will be a momentous occasion for the Dragons as they have a golden opportunity to claim their first ever Challenge Cup title after stunning runaway Super league leaders St Helen’s in the semi-finals with a club defining 16-35 point win.

However, beware because the Wolves are prowling and eager to make it nine Challenge Cup titles and first since 2012 with victory at the home of English football.

Who is the Favourite?

Few expected the Catalan Dragons to have made it this far with St Helen’s proving the immovable object in the league, but this is knockout rugby and that means anything can happen.

And happen it did, however, few can argue that Warrington are the more consistent and stronger outfit and rightly head the betting at 8/15 with Betway as of 20th August to win the match outright.

The Dragons have just been crushed by Wigan Warriors in Super League with the Warriors routing their opponents 35-6.

Since gaining a Challenge Cup final berth, Catalan have seemingly switched off shipping 92 points in their last two matches alone leaving Steve McNamara’s Dragons looking dangerously susceptible at the back heading into such an important match.

However, Warrington Wolves have a few issues of their own after Tongan prop Sitaleki Akauola is set to sit the match out after picking up a one match ban for a grade A dangerous tackle in the defeat to Castleford Tigers last week.

Akauola was adjudged to have ‘applied pressure’ on the legs of Castleford forward Mitch Clark and will miss the final but they do at least head to Wembley having enjoyed slightly more success than their Challenge Cup opponents.

Despite losing to Castleford, The Wire set up for the final against the Dragons by comfortably beating them in the league 56-6 to give the Wolves much more than just a psychological edge.

How they got there

Both sides entered the tournament at the fifth round and faced tricky opponents.

The Wire went up against former five-time Challenge Cup winners Bradford Bulls but easily swept the once great Bulls aside 54 points to six.

Canadian side Toronto Wolfpack were up next and despite having to play away from home, impressed even more with a resounding 66-10 victory.

A sterner test presented itself in the quarter finals as the Warriors were the visitors to the Halliwell Jones Stadium.

However, Steve Price’s men were on ominous form with a shutout of 23 points with no reply to send a statement of intent out to the remaining competitors.

The Wire faced the Leeds Rhinos in the semi-final and looked better throughout the contest eventually winning through with a comfortable 48-12 victory to book their Wembley date.

The Catalan Dragons made the trip to Yorkshire to face lower league opposition in the York City Knights.

Despite the difference in rankings, Catalan made hard work of York but came through the match 22-34 to set up a sixth-round clash with Whitehaven.

On home soil, the French outfit never looked troubled and strolled to a 56-10 victory before another trip to Yorkshire to face the Huddersfield Giants in the last eight.

A battle ensured but the Dragons desire came through along with a 6-20 win to see Catalan draw St Helens in the Semi-final.

Few gave Catalan much chance but on neutral ground McNamara’s band of Warriors will have given the Warrington faithful something to think about dumping Saints out of the tournament with a 16-35 win.

Worryingly for Catalan, the Dragons have only claimed one win in the sides last ten meetings.

Even more of a concern for Steve McNamara will be that 56-6 thumping the Wolves inflicted on his side just a matter of weeks ago.

In fact, to make matters even worse for the French side, the aggregate score over the last three games between the pair sees the Wolves out in front by 104-28.

A score difference of 76 points in just 240 minutes of pitch time.

Catalan can do it, but they will need an even bigger performance than they put in against Saints in order to achieve their maiden Challenge Cup title.

Warrington will head to Wembley full of confidence and although the absence of prop Sitaleki Akauola will be a blow, the Wolves bench is far too powerful to be too concerned with victory the only outcome as the Wolves go hunting.