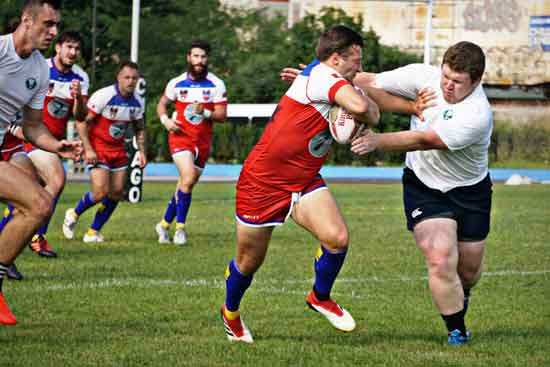 Both leagues involved in a cross-border exhibition game in Chicago are hailing it as a success.

The eventual outcome was a four tries to two win for the Canadian side, but more than that, the game marked the start of the Midwest Rugby League’s push to set up a new Midwest Conference that it hopes will become part of the USA Rugby League’s national competition by 2020.

It was the second game in as many weeks for the Stockyarders, who hosted a newly-formed Cleveland rugby league squad in an exhibition Nines match prior to Saturday’s contest.

Ontario led 18-6 at halftime behind a hat-trick of tries by Canada Wolverines players Emil Borggren and Cam Grace who also added a fourth in the second half. All the tries were converted by another Wolverines player Denny McCarthy.

Chicago scored a try in each half, one by Brian Rooney and the other by Dave Whitney. Halfback and goalkicker Colin Doyle converted both scores.

The game was played at the home of the Chicago Lions rugby union club and the Stockyarders had several Lions players on their team, including USA Eagles national team player Angus McLellan, who was coming off a stint in the inaugural season of Major League Rugby.

MWRL CEO Mike Featherstone sums up the game as a solid hitout for both teams.

“We are on a learning curve and this was a step up in quality and intensity for us,” he said.

“Having previously only played 9-a-side development league games we saw the ‘MWRL Challenge’ as our first grade debut so it was great to test ourselves.

“I’m really proud of our guys’ efforts and we put up a good show, but we were beaten by a better team. We’ll be back.”

Ontario was invited to play in the Midwest Challenge because if and when the new conference gets off the ground, it has been proposed that the Canadian team be part of it, something the ORL is mulling over.

Another option the ORL is considering is re-submitting an application to enter their team in the USARL’s national clubs competition in 2019.

However, ORL president Carolyn Ritchie says their main focus is growing the game in Ontario by increasing the local competition from three teams to four in the next year or two.

“We’ll have to have a discussion as a board to see how we want to do that, but I think we need more players in our league to make us as competitive a team as possible.

“There are a lot of roadblocks in regard to travel, distance and costs which have been the points of conversations that I’ve had with US coaches.

“Those are problems we’re trying to deal with and bringing in more sponsorship, so we don’t have to deal with those kinds of challenges.”

Ritchie goes on to say that the MWRL is keen to have Ontario become part of its expansion conference to help grow rugby league in the Midwest.

Discussions are now also underway for Ontario to host the Stockyarders in a return match in 2019.