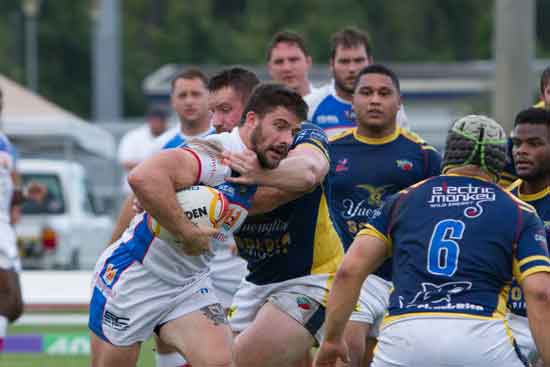 The two teams that will play in the 2018 USA Rugby League national championship game have been determined following the conference finals.

The Brooklyn Kings are the North champions having beaten the White Plains Wombats, while the Jacksonville Axemen have clinched the South title after dispatching the defending champion Atlanta Rhinos.

In the North’s title decider, the Kings outscored the Wombats six tries to three in their 34-18 victory.

The final score doesn’t really reflect the tightness of the contest, however, as Brooklyn didn’t put the game away until the final quarter, and even then, White Plains was still knocking on the door with six or seven minutes to go.

Kings hooker Jerome Easthope led the charge by scoring a hat-trick of tries for his team. He was ably backed up by left center Brandon Anderson, who notched a brace, while fullback Seimou Smith chimed in with a single.

“A real goal of ours after losing this game last year was to come back and build a side that could win this conference final and the national title as well.”

Dave Greiner, Matt Walsh and CJ Cortalano were the Wombats’ try-scorers. Player/coach Cortalano says despite the loss, it was still a successful season.

“Every year we’ve gotten better. We got our first playoff win this year.”

Jacksonville led from start to finish in the South Conference final to beat the Rhinos 44-16.

Eight tries to four was the final tally with the Axemen’s hooker and goalkicker Lachlan Bristow amassing a personal haul of 22 points from three tries and five conversions.

The game was marred by niggle by both teams, something that annoyed Axemen head coach Sean Rutgerson.

“It’s not part of what we do here in Jacksonville, but obviously I’m glad we still did enough to win it.”

Atlanta spilled a lot of ball that limited their scoring opportunities, coupled with giving away needless penalties that stalled their momentum.

Prop Jordan Heine topped the Rhinos’ try-scorers, while winger AJ Tacornal also got on the scoresheet.

Atlanta captain Nick Newlin conceded his team’s mindset may have been an issue.

“Maybe we had a little bit of that championship hangover type thing this year and it showed here and there during the season.”

The USARL national championship game will be in Jacksonville, FL, on Saturday, August 25.