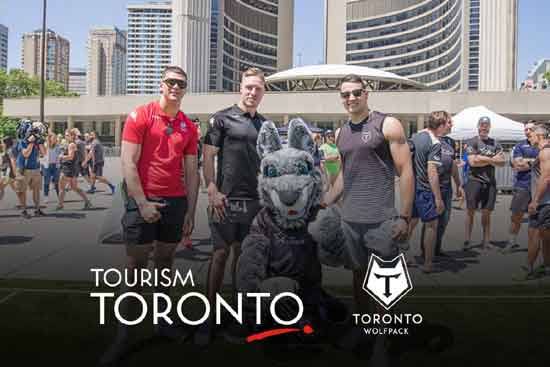 TORONTO (August 3, 2018) – Toronto Wolfpack and Tourism Toronto are set to launch a new partnership to promote Toronto as a top city break destination for U.K. tourists. The partnership will produce a series of promotional videos for Sky UK, which will air during U.K. broadcasts of the postseason ‘Super 8s The Qualifiers’, as well as a range of digital and social platforms.

“Last year, Toronto welcomed 263,000 visitors from the U.K., representing $221 million (CAD) in spending – our largest European market and second largest overseas market,” said Johanne Bélanger, President and CEO of Tourism Toronto. “This partnership with the Wolfpack highlights Toronto’s place as a must-see destination for U.K. sports fans looking to not only experience rugby in Canada’s Downtown, but to experience everything Toronto has to offer from hotels and attractions to our food scene and vibrant neighbourhoods.”

Toronto Wolfpack secured the Betfred Championship League Leaders’ Shield in July and during the postseason will have a chance to make rugby history by winning back-to-back promotions during their first two seasons. Two of the Wolfpack’s high-profile players will star in the series of adverts which promote Toronto’s compelling range of tourist attractions including Ripley’s Aquarium of Canada, CN Tower EdgeWalk and Toronto Heli Tours.

“Our players and coaches love the time they spend in our wonderful city, as do our visiting fans each week who talk up the unique fan experience that a trip to Toronto offers them,” commented Toronto Wolfpack General Manager – Commercial, Scott Lidbury. “This is a fun project to be involved in, supported by our partner Tourism Toronto, and we relish the chance to help showcase the City of Toronto to potential new audiences.”

Toronto Wolfpack are a global brand and are a proven vehicle to promote trade between Canada and the U.K. through an ever-expanding portfolio of sponsors and partners. Proud Canadian brands, including Air Transat and Maple Leaf Diamonds, successfully promote their products into the U.K. market while broadcast partners Eleven Sports USA, Fox Sports Australia and Setanta Sports Asia do so into 100 million homes globally. Tourism Toronto, and its website seetorontonow.com are seen as a natural fit for the Wolfpack as both organizations aim to drive increased investment and tourism to Toronto.

During the team’s inaugural 2017 season, Toronto Wolfpack hosted over 1,000 international supporters at Lamport Stadium in Toronto and that number will have increased to over 3,000 by the end of the 2018 postseason campaign. With the help of Tourism Toronto, that figure should rise to over 10,000 in 2019, bringing an estimated visitor spend of $8.4 million (CAD) next year.

“Our players, coaches and fans had nothing but praise following their trip to Toronto last weekend,” added Featherstone Rovers General Manager Davide Longo. “As well as experiencing a fantastic game day experience at Lamport Stadium and the surrounding bars and restaurants, they were able to very easily take in a wide range of other tourist attractions the city boasts.”

The Wolfpack, whose vision is driven by the belief that the world is a better place with more rugby balls in kids’ hands, intend to create a Global Rugby Centre of Excellence in partnership with the cities of Toronto and Vaughan. This project will also further boost Tourism Toronto’s goals of driving both new and returning visitors to the region.

ABOUT TORONTO WOLFPACK
Toronto Wolfpack are a professional Rugby League team dedicated to progressing through the RFL’s ranks, from League 1 to the ‘ League. Toronto Wolfpack are the world’s first transatlantic major professional sports team, playing home games at Lamport Stadium, Toronto, aka “The Den”. The Wolfpack began their journey in 2017 winning the Kingstone Press League 1 title and promotion in our inaugural season. In 2018 the Wolfpack won the Betfred Championship League Leaders’ Shield and will compete in the postseason ‘Super 8s The Qualifiers’ for a place in the 2019 Super League. For more information please visit torontowolfpack.com.

ABOUT TOURISM TORONTO
Tourism Toronto is the official destination marketing organization for the region, “Canada’s Downtown” – encompassing Toronto, Mississauga and Brampton. With sales and marketing programs in key markets around the world, Tourism Toronto promotes the Toronto region as a remarkable destination for tourists, convention delegates and business travellers. Tourism Toronto operates in partnership with the City of Toronto, the Greater Toronto Hotel Association and the Ontario Ministry of Tourism, Culture and Sport. For more information please visit SeeTorontoNow.com.