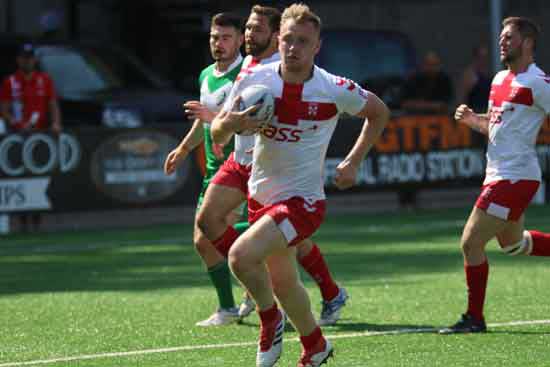 The Saes only needed a draw to clinch the title, with Wales, who were confined to third place following the defeat, needing a 45-point win.

It was an eventful fully charged first half where both sides pulverised each other with intensity normally seen in State of Origin encounters.

Harry Chapman nearly gave England the lead but he was pushed into touch by a collection of Welsh players when diving for the line.

But England did score first on 10 minutes with a Dan Gover try converted by Ben Stead.

A late challenge from Jason Bass on Matthew Morgan delayed the game for over five minutes as the Welsh player was treated on the pitch. Must to the disgust of the large home crowd who were baying for red, Bass was only given 10 minutes in the bin.

Wales weren’t able to take advantage. They did win a goal-line drop-out but that was the closest they got to scoring during their spell with an extra man.

They also gave away too many penalties which gave England the metres that they needed for Will Jubb to score their second try which Stead converted. 12-0 to England at half-time.

The intensity calmed down a lot in the second half as the favourites took control.

That was before two tries from Marcus Stock, both improved by Stead, brought the score up to 30-0.

Wales had never been shut out in the history of this tournament and they were determined not to on this occasion. Rhys Davies raced through for an unconverted try just after the hour.

They soon added another. Macauley Harris sneaked over from dummy half with Morgan Johnson again unable to land the conversion.

Ashley Bateman nearly scored a third but was forced into dropping the ball as he dived for the line.

And when Rhys Gant was sinbinned for backchat, England took advantage and Harry Chapman scored with Stead converting.

Scotland clinched second place but were given a real battle by Ireland who held out well, despite having just 16 fit men going into the game.

With the game scoreless for the first 12 minutes and the players already wilting in the heat, Jake Seymour kicked two penalty goals in the space of three minutes for Scotland, giving them a 4-0 lead.

Seymour kicked his third penalty on 22 minutes before a double injury for Ireland, and one man down for Scotland too, halted the already rugby union like game. Ireland already had four injuries in their 20 man squad so were only able to name three subs in this encounter, and the head clash set them back even further.

Ireland got the first try of the game when Paul Bolger forced his way over at the end of a good set on 28 minutes. Bradley Sheridan converted to level the scores.

But just before half-time, a Jordan Duncan try gave Scotland the lead back with Jake Seymour converting.

Jordan Duncan’s unconverted try early in the second half increased the Scots’ lead further before Duncan got their next try, scoring under the sticks with Seymour converting.

Alex Paterson scored in the corner and he was quickly followed over by Luke Westman. Seymour’s conversion taking the score up to 32-6.

Cordeaux set up Hogg for the sixth Scotland try with Westman sprinting through for the seventh. Seymour converted both.

Ireland didn’t give up and got a well-deserved consolation try through Peter Ryan that Sheridan converted.