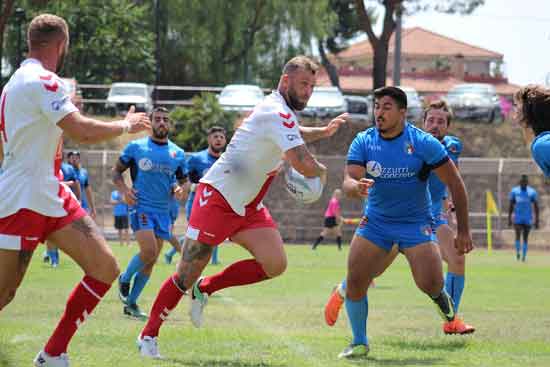 Although the hosts fell to another resounding defeat their improvement from the previous game was again noticeable. Once more they started with real passion, this time testing the visitors both with the boot and with ball in hand. They offered flashes of danger with speed of their breaks when taking possession and continued a physical defence.

It took eight minutes for the Lionhearts to claim the lead, Scott Robinson stretching over well for a try and making a touchline kick after the Italian’s inexperience showed in trying to play expansive rugby after forcing a mistake in their own 20.

The first twenty minutes saw the English on top but the game remaining quite tight. Wayne Bullough barrelling over for a try near the sticks, then a real hammer blow when Jordan Penny broke the line just before the water break and Robinson converted to make it 18-0.

The Blues continues to offer resistance despite being largely camped within their own half, but after Danny Gee went over to score the English began to cross the whitewash with some regularity. Harry Warburton, Wigan St Judes’ Ben Jones and Penny all finding a similar gap on the left to break the line and make the half time score an unflattering 42-0.

The second half started with Jack McHugh running in a score shortly after kick off but from there out the home team encouragingly tightened up.

The English still had all the territory but the next fifteen minutes saw an uncharacteristic succession of errors, but the Italians weren’t able to make their way up field or complete a set to take any advantage. Eventually McHugh went in again just before the next water break to see the score at 54-0 after an hour.

Wigan St Cuthberts Ryan Ashall went through and scored at the beginning of the final period of play, before Kennedy went in for the Lionhearts 11th of the game and final score of the tour.

The Italians rallied desperately and pushed to get themselves on the board before the final whistle but the England defence held strong to loud cheers at the end for a fantastic achievement.