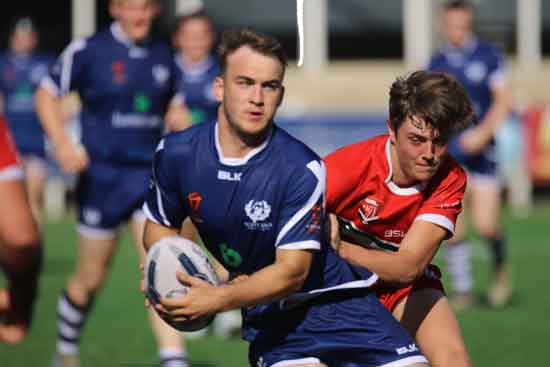 Scotland pulled off a shock 23-16 win over hosts Wales in Pontypridd in the Student Home Nations at Sardis Road on Thursday.

The result means that the hosts need to beat England by 45 points or more in the tournament’s final game on Sunday to win the title.

Good Welsh defence kept Scotland out in the first minute after an error gifted the Scots a set on Wales’ ten metre line from kick-off.

Wales were also denied an early scoring chance after Rhys Davies’ early effort was chalked off for double movement.

Scotland took the lead on five minutes when Jake Seymour scored in the corner. Matthew Hogg missed the conversion.

They looked to increase their lead but Jordan Duncan was held up over the line and Patrick Noutch was pushed into touch.

However they did increase their lead on 16 minutes through Seymour again in the same place with again the conversion missed.

Hogg went over for Scotland’s third try but again couldn’t convert so the score remained on 12-0.

Wales broke their duck on 22 minutes after Rhys Gant found a gap to dive and score. Fraser Stroud converted.

Gant was unlucky not to get a second, the referee had already blown for a knock-on before he reached the line.

Scotland took advantage and from a length of the field set, Seymour claimed his hat-trick try with Hogg’s goal attempt hitting the post.

They increased their lead four minutes into the second half after Nick Glohe ran through and Hogg converted.

Both teams looked for another try. Aled Davies thought he’d scored but was held up over the line, then James Bartlett prevented another Scotch try when he beat his opposite number Patrick Noutch to the ball.

Wales were next to score, Rhys Davies with a well-earned try and Stroud with the conversion.

They got another back, this one from Jarad Hinnem but the conversion was missed, leaving Scotland with a 22-16 lead.

Wales only needed a draw to give themselves a credible chance of winning the tournament so in essence, they only needed one more converted try, but handling errors prevented their chances.

Scotland sealed the game with five minutes to go. Luke Westerman was held up over the line but Hogg kicked a drop goal on the final tackle of the set before attempting a penalty from 40 metres that went wide.