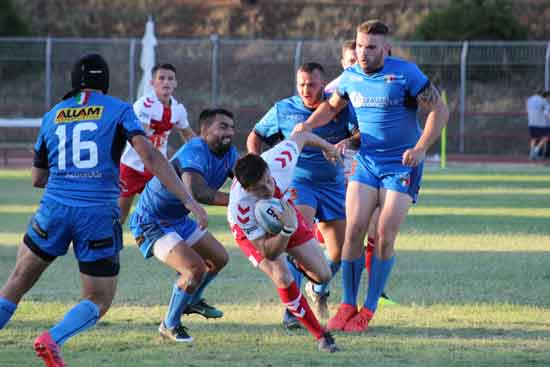 The Lionhearts found another level in their first test match on their three match tour to Italy. Coming up against opposition who offered more in attack and a more physical defence than their previous opponents they still powered to a big 76-0 victory.

The Italians started brightly and tested the Lionhearts line defence from the opening kick-off, coming up just short of the whitewash on the far right from their opening set. The home team were clearly fired up early and taking their passion and pride on the pitch, however their resistance was broken with 6 minutes on the clock when Wigan St Cuthbert’s Jordan Penny went through for his fourth try of the tour.

The hosts continued to meet the English strongly in the tackle and the game was looking as though it may be far closer than perhaps would have been expected until their aggression began to express itself too much resulting in penalties that the Lionhearts were all too eager to take advantage of.

Captain Jordan Gibson of Haydock was the first to take advantage in breaking a tackle on the left to go over in the middle before Danny Brown then went over on the right five minutes later to stretch the tourists lead to 16-0. Another five minutes went by before another penalty near the line allowed Garswood Stag Wayne Bullough to crash over for a score, soon followed by Penny going over again before the Italians took on board a harsh lesson about their discipline – at least initially.

There followed the best passage of Italian play in the game, stopping the Lionhearts in attack and almost making the most of a rare consecutive set of six in possession – they created an overlap and left wing Roberto Greco celebrated for a try which was ruled out for a forward pass by the touch judge.

The spirit of the hosts was finally broken however by the Lionhearts response, Orrell St James’ Dave Kennedy breaking the line from the resulting Lionhearts attacking set to make it 32-0 just before half time.

When the second half began the Italian shape and discipline was not at the same level as that seen in the first and the game soon ran away from them. Within the first six minutes of the second half Orrell St James’ Jack McHugh had scored two quick tries and Haydock’s Danny Gee another to bring the score out to 48-0 and the Italians had begun to fly out of the line looking for hits rather than defend as a team.

The England side remained composed in the face of the increasingly desperate attempts to disrupt their attacking roll and racked up five further tries as the sun set over the final half an hour of play. Harry Warburton (Folly Lane) was first of them over wide left before Kennedy broke through the line again, Deane Meadows (Shevington Sharks) ran in a charge down, Scott Robinson (Wigan St Judes) burst through and Stuart Pemberton (Wigan Bulldogs) completed the scoring with an acrobatic finish by the touchline.