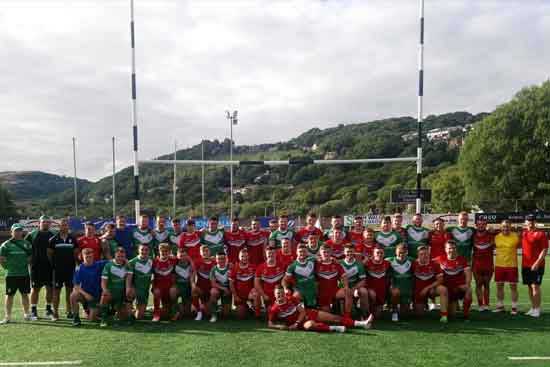 Emanuelli scored 282 points in 77 games for South Wales Scorpions from 2014-17 whilst De Chenu starred for a season for Celtic Crusaders in 2006 scoring 22 tries in 29 matches.

Ireland played well in the first half and matched Wales all the way, but there was only one winner after the break as the Welsh scored 32 unanswered points, despite not having a full complement of players when scoring over half of those.

The try didn’t open the floodgates. The first eight minutes saw Ireland close to scores a few times, and the same for about 15 minutes after Wales’ opener.

An error on Wales’ 10 metre line gave Ireland a repeat set and a scrum in the perfect place which they didn’t waste. Peter Ryan dived in under the sticks and Adam Malone converted to level.

Wales regained their lead straight away. After a mix-up in the Irish defence, Dafydd Rees grabbed a loose ball and ran home. Johnson converted.

Then came the try of the day. James Bartlett did well to beat his markers before cleverly creating a gap for Hinnem who skillfully avoided tackles to score his second of the game.

Ireland got back into the game just before half-time after Paul Bolger kept enough ball control to dive and score an unconverted try to bring the score back to 16-10.

Wales increased their lead five minutes into the second half when Lloyd Selby-Smith scored in the corner and Johnson converted well.

Ireland were unlucky not to get a try back when Matt Connolly’s pass to Mark Woods was deemed forward. Woods had grounded after a well-worked move.

Wales took advantage of their good fortune, went onto the attack and scored again. Bartlett touched down in the corner and Johnson’s kick went wide.

They cemented the win on the hour. Macauley Harris squirmed his way over for a typical hooker’s try, Johnson again unable to land the extras but Wales were 20 points up.

Ireland were given an advantage 13 minutes from time when Rhys Davies was sinbinned for a high tackle but it was Wales who scored with a man down. Harris was short of getting his second but from the next play, Hinnem grabbed his hat-trick try. Johnson converted.

Wales briefly went down to 11 men when Aled Davies was given a yellow card for tackling a man in the air, but again they scored, Harris with his second after Wales gained metres via a 40-20. Johnson converted.

They weren’t finished yet. Now back to 12 men, Wales scored their ninth try through Conor Harding. Johnson’s sixth conversion ending the game.

Day two of the tournament is on Thursday at the same venue, Sardis Road in Pontypridd with England taking on Ireland at 2.30pm before Wales face Scotland at 4.45pm. Free entry for all fans.