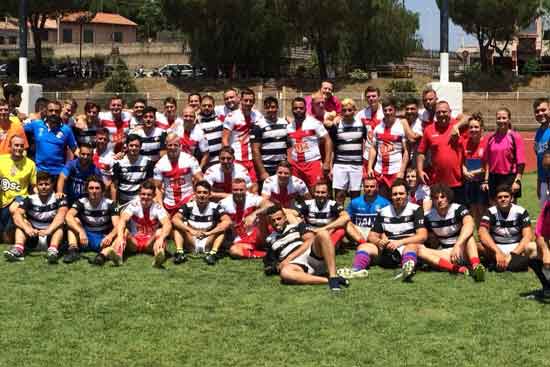 Against a spirited and proud Sicilian Select XIII the Lionhearts came away with a win in the first game of their three match tour, led by hat-tricks from Jordan Penny and Dave Kennedy.

The local side went behind almost immediately after Wigan Bulldog Stuart Pemberton claimed a bouncing kick off and the team worked the ball right to Folly Lane’s Harry Warburton who grounded the ball.

Instead of a deluge of points after that there was a stubborn ten minutes of resistance from the hosts, who created little opportunity of their own but put their bodies on the line to prevent any further score until Scott Robinson (Wigan St Judes), Danny Brown (Latchford Albion) and Kennedy (Orrell St James) crossed the line in quick succession.

After a water break in the searing heat the Sicilians steadied the ship to prevent the Lionhearts scoring again until just before half time when Penny (Wigan St Cuthberts) went over for a quick double to make it 32-0 at the break.

The second half began in a similar manner to the first. Vice-Captain Kennedy went over for his second score of the game, but after Captain Jordan Gibson of Haydock kicked the goal there was ten minutes of resistance from the Sicily Select.

However, this time after a repeat set for a rip near the line allowed Penny in for his hat-trick try the home side weren’t able to dig any deeper into their energy reserves and the floodgates opened a little.

From kick-off Warburton went over for his second score, before Jack McHugh of Orrell St James got himself on the scoresheet shortly after. Two long distance tries in three minutes followed that as a tired Sicily began to struggle, Kennedy first completing his hat-trick before McHugh stretched his legs to out pace the full back to the corner.