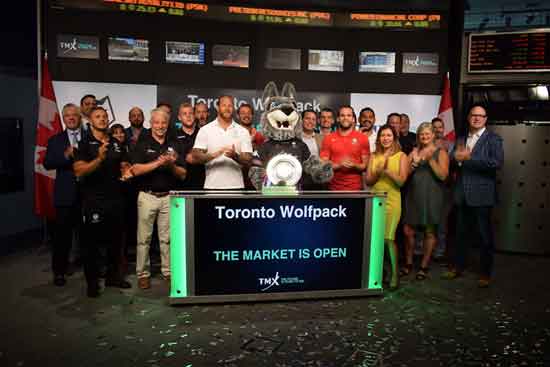 The TSX opening is the latest high-profile appearance as Wolfpack players and coaches drive their commitment to grow the game of rugby in Canada and beyond. It follows the team lifting the Betfred Championship League Leaders’ Shield on Saturday afternoon at Lamport Stadium, the Wolfpack’s third trophy in just two years.

“It was a privilege to present the Championship League Leaders’ Shield to the team at Lamport Stadium on Saturday. The Wolfpack’s ambitions to build a truly Global Brand, demonstrated by events like opening the TSX today, are a huge positive for the City” says Councillor Mark Grimes, City of Toronto.

Rugby is an international game, renowned for developing leadership, commitment and teamwork worldwide with the Wolfpack’s core vision driven by a belief that the world is a better place with more rugby balls in kids’ hands. Along with the City of Toronto and the City of Vaughan, the Wolfpack plan to create a Global Excellence aimed at producing more players like current second row Quinn Ngawati, the first Canadian-born player to play professional Rugby League.

“Toronto Wolfpack were honoured to be in attendance for the opening of the Toronto Stock Market. We are receiving significant support from the City of Toronto and key enabling organizations such as Tourism Toronto, the Canadian UK High Commission and Toronto Global as these bodies recognise how the Wolfpack can be the bridge to driving increased investment and tourist numbers to Toronto”, comments Scott Lidbury, Wolfpack General Manager – Commercial.

The Wolfpack’s inaugural season in 2017, saw the team host over 75,000 fans at Lamport Stadium in Liberty Village. That figure includes over 1,000 international supporters, made possible by the team’s partnership with Air Transat, whose parent company is listed on the TSX. In 2018 over 3,000 are expected to travel and in 2019 this number should rise to 10,000.

“Air Transat is really proud to be here today, alongside the Wolfpack, as their official partner airline and as the official sponsor of North America’s first professional rugby team. It is exciting to partner with the team during this growth period, and to accompany team members and fans on our regular year-round flights between Manchester and Toronto”, says Geneviève LeBrun, Vice-president Marketing at Transat.

This is one of a number of partnerships that helps Canadian based organizations expand their exposure globally and assist growth into the European market. This commitment is working in both directions as the club also receives financial support from UK business targeting the Canadian Market and is particularly significant following the introduction of the Canada-European Union Comprehensive Economic and Trade Agreement (CETA).

Along with international brands such as Setanta Asia, who recently agreed to a broadcast deal that extended the Wolfpack’s reach into more than 100 million homes, the Wolfpack also proudly support a number of local family run Ontario businesses. This includes independent craft breweries that are brought in to create the Wolfpack’s highly acclaimed Beer Garden, and enhance the game day experience.