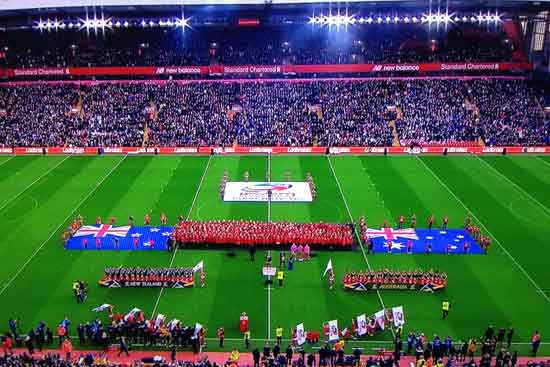 The NRL is proposing a return of Kangaroo tours of Great Britain as part of a shakeup of the international Rugby League calendar over the next four years.

And work has already begun on developing an International Nines Tournament to be held at the end of the 2019 season.

ARL Chairman Peter Beattie said today it was time to give international Rugby League the platform it deserved with its own dedicated calendar of events.

He said the NRL’s plan, to be presented to the Rugby League International Federation meeting in Singapore later this month, would take a huge stride in showcasing the game internationally.

Consultation will also continue to take place with the RLPA, NZRL , RFL and other key stakeholders before the calendar is finalised.

Mr Beattie said the cornerstones of the proposed calendar included a return of a three-match Kangaroo tour of Great Britain beginning in 2019, together with new tournament platforms for emerging nations to compete against the tier one nations during the cycle.

“Many of the biggest stars of our game will tell you that a Kangaroo tour was the highlight of their career,” Mr Beattie said.

“With the revival of interest in international Rugby League there is no better time to revive the Kangaroo tour and reward our finest players with a three-Test series in Great Britain.”

The last Kangaroo tour of Great Britain was in 2003.

Mr Beattie said the proposed calendar would provide opportunities for Pacific nations to compete on the bigger stage in tournaments, more regularly.

“We saw during the World Cup how the Pacific Nations emerged as genuine rivals for the top tier nations – and thrilled fans at the same time,” he said.

Other highlights of the NRL’s proposed calendar for 2019-22 include:
• A new Oceania Cup in 2019 featuring round robin matches between New Zealand, Fiji, Samoa and Tonga to be played during June and October
• A Four Nations tournament held in the Southern Hemisphere in 2020 featuring Australia, New Zealand, Tonga and Samoa
• Four Nations tournament held in the Northern Hemisphere in 2020 featuring England, France, PNG and Fiji
• Retention of the traditional Australia v New Zealand Tests
• England to tour New Zealand for a three Test series in 2022
• In addition, discussions have begun on a new International Nines Tournament which would be held at the end of the 2019 season.
Mr Beattie said the NRL was a strong supporter of international Rugby League.

“However, until now, there has not been enough structure around the international calendar and the game has missed some real opportunities to showcase Rugby League outside Australia,” he said.

“We are presenting a four-year calendar which can be repeated and replicated in future cycles to give the international game more certainty and exposure.

“Those tournaments and events will be bookended by a World Cup every four years.

“A key to this proposal is that we are giving emerging nations the opportunity to become genuine competitors with the tier one nations.

“But we will do it by confining international tournaments to fixed windows to ensure the wellbeing of our players.”