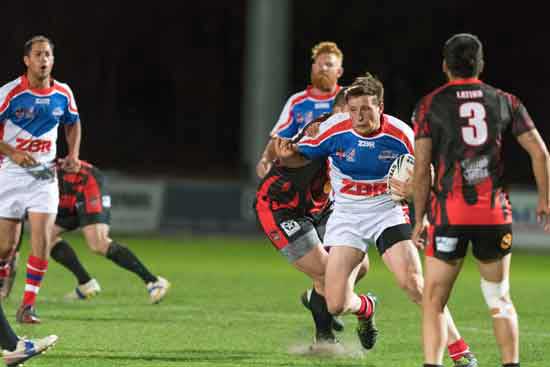 The NRL and English Super League are being encouraged to take a leaf out of the NFL’s playbook and open up extra roster spots for international players.

The move has been suggested by Curtis Goddard, founder of the Southwest Florida Copperheads, the newest franchise in the USA Rugby League’s national clubs competition.

“It seems like a no-brainer. It’s just a matter of making sure the NRL and Super League are not going to have a cap hit like the NFL is doing,” he says.

In the 2017 offseason, the National Football League initiated its International Player Pathway program in which all four teams in the NFC South division were able to add one extra practice squad spot for a foreign-born developmental player increasing those teams’ practice squads to eleven.

The players trained with their teams like other practice squad members and were allowed to play in preseason games but weren’t eligible to be activated to their teams’ 53-man rosters last season.

This offseason, another four clubs in the AFC North have been granted the same ability, making a total of eight international players who are now part of the pathway program.

The NFL says the aim of the program is to provide international athletes the opportunity to compete at the NFL level, improve their skills, and ultimately earn a spot on an NFL roster.

Canadian Football League commissioner Randy Ambrosie is of the same mind suggesting that the CFL could look at doing something similar in the future by reserving spots on team rosters for global players.

His rationale being that it would help to expand the CFL internationally.

Goddard sees a huge opportunity for rugby league to do likewise at the NRL and Super League levels.

“Especially in Australia because of the way they’ve reconfigured the player development pathway through the Intrust Super Premiership NSW and Intrust Super Cup (Qld) as they realized playing at the U-20s level wasn’t preparing guys for the NRL,” he says.

“An NRL club could bring in a guy as an extra international spot, it wouldn’t affect their salary cap and then when the season starts they move him to one of their feeder clubs at the appropriate level of competition.”

Goddard continues that at some point a club would know if the player was good enough to make it in the NRL, and if not, then he at least would have benefited from an accelerated development program.

“During that time, they’re playing footy at the highest level that they possibly can and are receiving the best instruction all offseason, all preseason.

“Even after two or three years, maybe they’re Massey Cup level players and not quite NSW Premiership players and then ultimately come back to America like I did super excited about rugby league and expanding the USARL.

“That’s ultimately what will end up happening. They’re going to come back home unless they become the next Semi Radradra, and God bless them if they do, because it will have paid off for the clubs which backed themselves.

“They’d reap the benefits if that comes to be, and if it doesn’t, one out of ten is the next NRL starter and the rest go back home and that’s only going to benefit us.”

He says NRL clubs already have these kinds of formalized pathways set up for domestic-based players, so all they would need to do is set up an international pathway to get guys in through the front door as opposed to the way many players do it by playing in regional competitions under strict visa limitations.