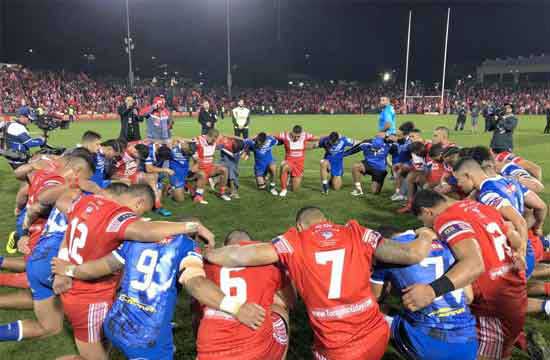 Tonga maintained their recent dominance over Samoa on Saturday night in front of a packed house running out 38-22 winners in the Pacific test.

It all started with both teams coming together during the Siva Tau and Sipi Tau. That alone was worth the admission at the gate.

The Pacific Test was shaped up as a chance for Samoa to step up and put behind their disappointing performance during the 2017 World Cup. It was looking good for Toa Samoa with Gavet crossing over in the first few minutes but is wasn’t to be.

Tonga racked up 30 points before half time with tries to Havili, Hingano, Hurrell, Jennings, Hopoate and Tupou.

Tatola scored for Tonga just after half time and it looked all over for Samoa but Toa staged a mini comeback with tries to Lafai, May and Taufua. But it was too little too late With Tonga now knocking on Australia’s door for a one off Test Match.