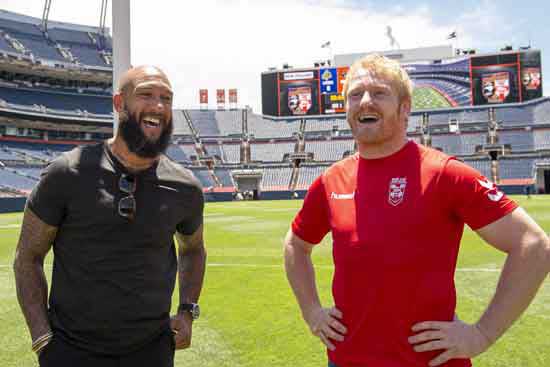 England Rugby League star James Graham was given even more inspiration ahead of his 40th appearance for England when he caught up with one of his former Everton soccer heroes.

Graham and his England team mates are in Denver for the mid-season Test against New Zealand on Saturday, kick off 2pm at Broncos Stadium at Mile High. Whilst in the States, Graham met former Everton and USA goal keeper Tim Howard, who now plays for MLS side Colorado Rapids.

Graham commented, “Tim was brilliant in his time at Everton. I always remember the letter he wrote to the Everton fans when he left and thinking about it still makes the hair stand up on the back of my neck. It was real privilege to meet him and the other lads from the Rapids ahead of the Test match at Mile High Stadium.  We have been made to feel very welcome in Denver this week and we are all looking forward to taking on New Zealand.”

Tim Howard became a national hero in America with his shot stopping at the last World Cup that resulted in him going to the White House. Having met up with Graham he said, “My first introduction to rugby was when I moved to England and I used to love watching games on the television. These guys are so big and strong, it is crazy how they put the big hits on each other. I would like to wish James and the England boys the best of luck for the game and we look forward to welcoming back to Colorado again soon.”