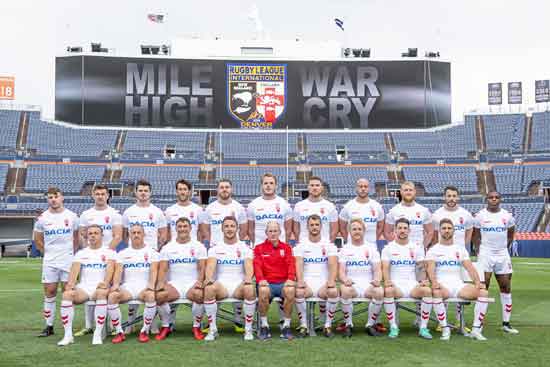 England head coach Wayne Bennett has named his side to take on New Zealand at Mile High Stadium in Denver this Saturday, kick off 9.10pm (BST).

The starting line up includes nine players who started against Australia in the World Cup Final in December.

Hull FC’s Jake Connor and St Helens’ Tommy Makinson are set to make their debuts off the bench. Skipper Sean O’Loughlin returns to the side having missed the World Cup Final with a quad injury.

Stefan Ratchford and Mark Percival, who were both in the squad in Australia but did not make the team for the Final, will start against the Kiwis in Denver.

St George-Illawarra Dragons prop James Graham will make his 40th England appearance almost 10 years to the day since his first England appearance against France in June 2008. Of the current squad, James Roby and Sam Burgess also played in that game. Graham has also made an additional five caps for Great Britain before 2008.

Saturday’s historic Test in Denver, Colorado comes 110 years since the first meeting between the countries when England won 18-16 at Central Park, Wigan in 1908.

Whilst Great Britain and New Zealand have met on many occasions, this will be only the 15th game between England and New Zealand and the first meeting since the 2016 Four Nations game at John Smith’s Stadium in Huddersfield, when a late Shaun Johnson drop goal sealed a 17-16 win in Wayne Bennett’s first tournament. Ten players from that game will feature for England on Saturday. England can tie their overall record with New Zealand with victory ahead of this Autumn’s three game series against the same opponent. England have secured six wins, New Zealand have won 7, with one draw back in 1975.

England v New Zealand will be played at the Sports Authority Field at Mile High, Denver on Saturday June 23 and fans in the UK can watch live from 9pm on BBC Two.

Tickets for this Autumn’s International Series are also on sale at rugby-league.com and are priced from £25 for adults and £12.50 for concessions. ‘Our League’ members will get £5 off all ticket categories when purchased through the Our League App or website.