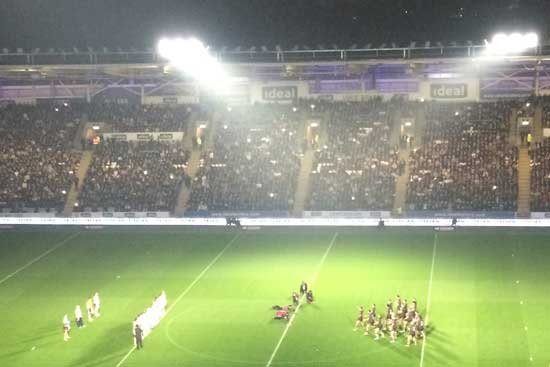 A week out from the Rugby League Football International Challenge in Denver and the England and New Zealand squads are preparing for their trip to North America.

Kiwis head coach Michael Maguire says he and the national selectors will wait until after the final match of the NRL’s Round 15 between the Wests Tigers and Canberra before naming his squad.

The New Zealanders are scheduled to fly out of Sydney Monday morning and will have their first two practice sessions Tuesday (US time) before the Test team is named later that same day.

The players will be put through their paces again twice Wednesday, while they’ll get Thursday off to check out the many tourist attractions the Denver area has to offer.

Friday will see the squad getting their first look at Mile High stadium where they’ll have their final hit out before Saturday’s game.

Meantime, injury has forced a late change to Wayne Bennett’s England squad as they also get set to jet into Denver from opposite sides of the planet – Australia and the UK.

Super League prop Scott Taylor is a late inclusion to cover for George Burgess, who picked up an injury in the latest round of the NRL.

English fans who don’t make the trip to the US will still be able to watch the game on TV with BBC Sport announcing that it will televise the match on BBC 2. BBC Radio 5 will also carry a live coverage of the game.

“We’re delighted that the BBC have chosen to broadcast the game live so supporters here in the UK will be able to tune in.”

Viewers in New Zealand will get to see the game on Sky Sports 2, while Australian fans can tune in to Fox Sports to catch all the action.

However, for viewers here in the US hoping to watch the game, it’s still unknown if it will be available.

Promoters Moore Sports International (MSI) have been in negotiations with broadcasters and are confident there will be coverage.

That is expected to be either on TV or streamed online. MSI says they’re finalizing terms and an announcement is forthcoming.

And in related news, the England and New Zealand leagues have announced that they are chipping in to pay for Rugby League Players Association representative Clint Newton to attend the game.

Newton, who played for the USA Tomahawks at the 2013 Rugby League World Cup, will review the player welfare measures that each country has taken to assure their players’ health and welfare.

Newton is expected to meet with both head coaches Bennett and Maguire.