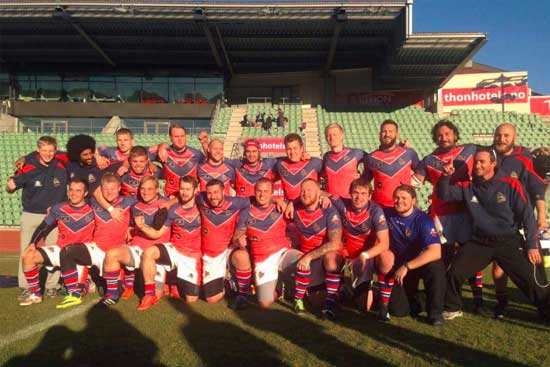 Norway is the latest country to complete its activities on the EU part-funded Training and Education Portal project.
RLEF tutor Phil Smith oversaw young Serbian Rugby League Federation educator-candidate Ivica Djordjevic and the host’s head of match officials Adrian Seglem deliver a level one course to seven candidates in Stavanger. It was the first time that Rugby League Norge has delivered a course in Norwegian, meaning the participants obtained a greater understanding of the rules and laws.

Smith, who has been mentoring Seglem for two years, said: “Adrian was excellent in the way he presented his course. He delivered it confidently and with great knowledge, interacting well with the candidates. I believe he could well go on to become one of the best native educators the RLEF has produced.”

Of the seven participants, two are converted football referees who made an 1100km roundtrip from Oslo, observed a Norwegian championship match between Stavanger and Flekkefjord Tigers which was refereed by Sweden’s Raj Shah and then Djordjevic, before taking the course the following day, with four moving onto RLN’s development system and keen to referee in the future.