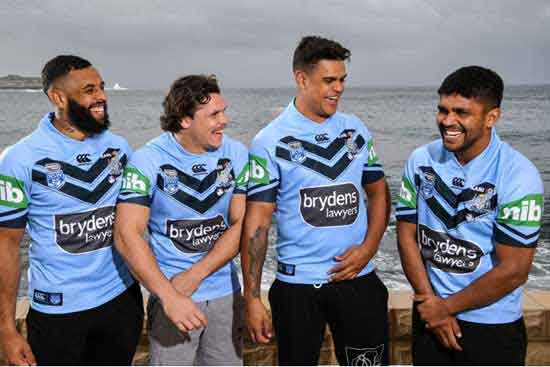 Josh Addo-Carr, Latrell Mitchell, Tyrone Peachey and James Roberts will have even more reason to be proud when they run out on to the Melbourne Cricket Ground on Wednesday night for their debuts for the Brydens Lawyers NSW Blues in Game One of the 2018 Holden State of Origin Series.

The KARI Foundation will also make its Origin debut, becoming the first Indigenous-owned organisation to be displayed on the front of an Origin jersey.

The decision to feature KARI on the front of the jersey, highlights the strong long-standing partnership between New South Wales Rugby League and KARI, which also extends to KARI occupying office space in the new NSWRL Centre of Excellence due to be completed in January 2019.

The KARI Foundation designs and develops programs and initiatives which have delivered successful outcomes for thousands of indigenous people across education, health, arts, indigenous culture and sports; and together NSWRL and KARI have already delivered some great results for young Indigenous people and for communities all over the state through the vehicle of Rugby League.

NSWRL CEO David Trodden said: “After a few years of KARI being on the front of City Origin jerseys, having KARI on the jersey of the Brydens Lawyers NSW Blues is an important first for our organisation in that it is the first time that a community partner has been represented on our jersey.

“At the same time, it is both a statement of the importance which we place on our relationship with KARI and also a recognition of the wonderful work which they do in our community.

KARI CEO Casey Ralph said: “The KARI Foundation has worked closely with the NSWRL during the last several years which has delivered outstanding results.

“Recognition of our partnership by NSWRL and earning our place as the first Indigenous organisation on the NSW Blues jersey is an important testimonial to commitment and dedication to the advancement of Aboriginal excellence.”